The 42nd generation will change the world (pt. 6)

Continued from The 42nd generation will cross into the Promised Land (pt. 5) This is the final part of Andrew Shearman’s teaching on The 42nd Generation. It’s about a generation that changes the world. With Andrew and a tribe that is forming, I’ve committed my life to rousing and serving that …
By Seth Barnes
27 May 2008, 12:05 am
By Seth Barnes
27 May 2008, 12:05 am

Continued from The 42nd generation will cross into the Promised Land (pt. 5)

This is the final part of Andrew Shearman’s teaching on The 42nd Generation. It’s about a generation that changes the world. With Andrew and a tribe that is forming, I’ve committed my life to rousing and serving that generation. 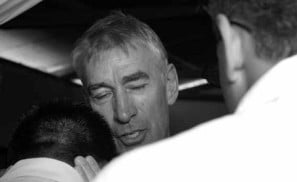 The condition of the world does
not mean that Christ cannot conquer it. We
can cross the Jordan if we have Christ formed in us. Where are the men and
women who say we are here to change the world and we will enlarge our
world? The valley of dry bones in
Ezekiel turned into a vast army.

It’s time for purity. The private character of Jesus led to his
public commendation by God. At 30 years
of age, suddenly his life changed. He
declared, “I am the Christ.” The Bible
says as a man thinks in his heart, so he is.
He who rules his own spirit is stronger than he who takes a city. Out of
the abundance of the heart, the mouth speaks.
We need a pure heart.

We limp because we are dealing
with things that we have never dealt with before. We are talking about motives, about integrity
and righteousness. My awareness of my
own death gives life to my hearers. The
qualification for God to use you is weakness.
For example, God brought Gideon’s army down to 300. God can use my strengths as long as I
renounce my confidence in it.

Don’t deal with my heart – deal
with your own. Deut. 11, says that obedience leads to rain. Disobedience leads to no rain. Fight your enemy! Every weapon Satan uses
against us is a pretend weapon. The
Bible calls them pretensions. Take every
thought captive and make it obedient to Christ.

It’s time for maturity. Which part of “grow up” don’t you
understand? To grow means to increase or
develop. II Peter 1 calls us to put away
childish things. We are called to
endure, to make contributions, to be givers not takers, to be producers not
consumers. You aren’t going to expect
somebody to do it for you. Let’s grow
up. You say, “I don’t like the way he
spoke to me.” Well at least he spoke to
you!

It’s time to risk coming out of
obscurity in the home, in the office, in your everyday affairs. Put your anointing on the line. What do they know you for at work? That is maturity.

Mathew 11:12 says, “The kingdom
of heaven has been forcefully advancing, and forceful men lay hold of it.” We are called to go and take dominion, go and
rule the land. In their inheritance
there were giants and milk and honey. They
had to fight to get it. Sanctification
prepares us for our inheritance.

Those of us who reach maturity
are going to be warriors. The battle
is the Lord’s – Jesus is the commander of the army. We join him.
Have you joined in him as a member of the 42nd generation? Come
to faith in the Christ in you and what he is doing on the earth and you will!