The Bible: third part of the trinity?

Let me begin this provocative blog by saying, I thank the Lord for the Bible and want to protect it against heretics. That’s what motivates me to write here. So, there is a heresy that some in the evangelical church espouse that states that God is incapable of speaking to us in any ways outsid…
By Seth Barnes
28 May 2007, 12:05 am
By Seth Barnes
28 May 2007, 12:05 am 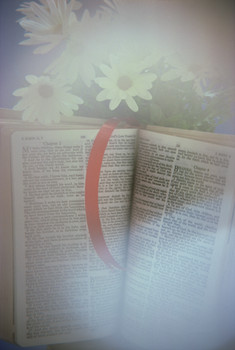 Let me begin this provocative blog by saying, I thank the Lord for the Bible and want to protect it against heretics. That’s what motivates me to write here.

So, there is a heresy that some in the evangelical church espouse that states that God is incapable of speaking to us in any ways outside of His Word. The fact is, God can talk to us any way He wants to. After all, He’s God!

We live in a culture grounded in legal systems and terminology and we tend to superimpose this legal perspective on God. We spend so much of our educational lives with our noses in books. We think to ourselves: “Written communication is so much more reliable than other forms of communication. It is static and linear. It can be analyzed and fairly debated. The Bible itself testifies to the inspiration of scripture. Why wouldn’t God want to restrict His communication with us to the printed page?”

Unfortunately Christians taking this perspective put
God in a box. When they declare that God has limited Himself to speaking through Scripture, they ignore the fact that most Christians down through history not only have never owned a Bible, but were illiterate. Bibles weren’t even available to the average person until after Guttenberg invented the printing press. World literacy didn’t pass 50% till the past century, and even now, many Christians the world over are still illiterate.

Are we to conclude that therefore the majority of Christians throughout history have been unable to hear from God? Has God been waiting for the literacy rate to climb so that now He can finally speak to us? And now that we’re able to read it, does our reading eliminate the subjectivity of interpretation? Are the number of denominations and sects declining as all Bible readers arrive at the same interpretation of scripture?

How ethnocentric and parochial we are to limit the way in which God can speak! Early in his ministry Jesus took on this kind of formulaic legalism when he confronted the Jews by saying, “You diligently study the Scriptures because you think that by them you possess eternal life. These are the Scriptures that testify about me, yet you refuse to come to
me to have life.” (John 5:39-40).” He was showing the emptiness of what might be termed “Bible deism”- a theology that limits our relationship with God to the Scriptures.

Those who would limit the Lord’s interaction to Scripture miss the fact that it still must pass through the flawed filter of human interpretation. Thus the Crusades and the Inquisition and the practice of Indulgences were grounded not in new revelation, but in a flawed
interpretation of the Bible. People limit God’s communication to Scripture because of their desire to prevent heresy, but heresy results anyway. Even the Islamic and the Mormon faith are grounded in Scripture. Yes, they add Scripture to the canon, but they also misinterpret great swaths of Scripture.

It is ironic that the very thing that today’s well-intentioned Bible teachers want to guard against, the misinterpretation of Scripture, is the very thing that they are guilty of. By limiting God’s communication to the Bible, they disregard dozens of biblical examples and direct scriptural injunctions showing a God who communicates relationally in other ways.