The blind see – a miracle in Kenya 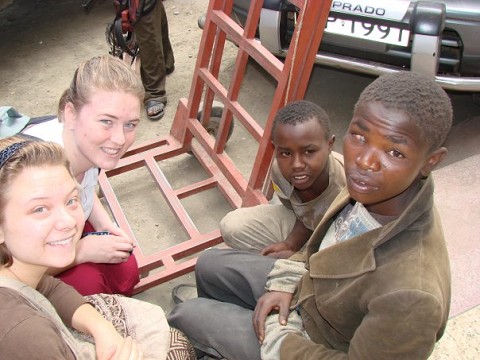 I sat at lunch across from Shaye Cornell a little over a month ago. I asked her, “So what happened on your trip to Kenya?”  What she shared was incredible.  Here’s the story:
A few weeks before we left for Kenya, one of the girls on my team, Leigh, had a friend pray for her.  This friend told her that she sensed God was saying that Leigh would see a boy with a white eye healed.
Just the thought of being God’s instrument like that had Leigh excited. She flew into Nairobi full of faith and expectation. And we all wondered, “Will Leigh see a boy with a white eye? Will she pray for him and see him healed?”  None of us had ever heard of such a thing.
Needless to say, after arriving in Kenya, we were all on the lookout for a boy with a white eye.  Then, suddenly, on that first day, much to our amazement, there he was! His name was Joel, and sure enough, he was blind in his right eye – it was in fact white.
Leigh and some members our team started talking to him and getting to know him. And after a while she asked him, “Would it be OK if we prayed for your eye to be healed?”
“Yes! I would like to see,” Joel responded.
So Leigh prayed for him. When she’d finished, she apprehensively looked at his eye. But nothing had changed – he was still blind.

We returned to the city about four days later to look for Joel. We saw him in the distance and walked up to him, hoping against hope. We were all discouraged to find out his eye wasn’t healed.  “Why didn’t God heal him?” We thought. We couldn’t understand.  Throughout the following week, we spent some time wrestling with questions of God’s faithfulness, His goodness, and even our own ability to control things of God’s Spirit, especially healings.

We’d pretty much written the whole thing off. Who can understand the ways of God? Just meeting Joel in the first place had seemed so dramatic. We had thought it was inevitable that he would be healed on the spot. After a few weeks had passed, we returned to the city for a 3rd time.  It was June 15th.
We were sitting in a restaurant minding our own business when a boy began tapping on the window to get our attention. He seemed very agitated. We recognized him as one of Joel’s friends who had been with him. He came inside to talk to us, his words tumbling out of his mouth. “Do you remember praying for my friend Joel? He was blind in his eye. Now he can see! His eye is no longer white! He’s been healed!”
As you can imagine, we were all amazed and thrilled. And his report was confirmed by our Kenyan pastor, who saw Joel two days later with perfect, beautiful eyes and vision!
Since then we’ve asked ourselves, why didn’t God heal Joel immediately? Why did he allow us to go through two weeks of doubt? We were so full of faith at first, and then when God didn’t answer our prayers, we became faithless. We had been so perplexed by the whole incident.
We’re still processing the experience, but perhaps the most important thing we learned is that it’s not about us and our timetable. God’s ways are inscrutible. He still heals, but he’s not a vending machine. We need to wait on him with faith for his timing.

So many of us struggle with God’s timing. Why doesn’t he give us the answers we’re looking for when we’re looking for them? I don’t know, but we’ve seen his power and next time will be more patient in waiting for his timing to be revealed.