The case for short-term missions, Pt. 2

Continued from The case for short-term missionsLet’s dissect each of our flawed models in order to gain a better understanding of how to better design your next STM team: 1. No Preparation Sometimes STM teams produce unintended consequences. However, unintended consequences are parti…
By Seth Barnes
03 March 2008, 12:03 am
By Seth Barnes
03 March 2008, 12:03 am

Continued from The case for short-term missions

Let’s dissect each of our
flawed models in order to gain a better understanding of how to better design
your next STM team: 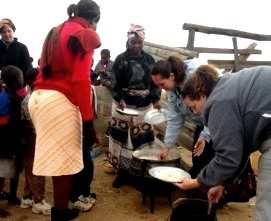 Sometimes STM teams produce unintended consequences. However, unintended consequences are
particularly prevalent for those using a model of STM which involves little
screening, preparation, or follow-up.
These are essential aspects of any successful missions model. The first car ever made was full of
imperfections and bugs. Did its
producers scrap it? No, they kept on
improving it by making new models (and they continue to do so even today). So it is with STMs. Many models with successful
track records exist. Some of the
original models don’t work too well.
However, models such as those developed by the Center for Student Missions,
Frontiers, or the organization for which I work, Adventures In Missions,
produce spectacular results with regularity.
If you hold up an outdated model and say, “This is representative
of STMs,” I suggest that you are putting a straw man forward. Look at the latest models (which incorporate
heavy doses of preparation) before judging the worth of the concept.

Why is it in evangelical circles that we spend so much time
organizing our work and so little time praying about it? I’d like to propose that we work toward a
goal of spending an hour in prayer for every two hours we spend planning a
mission project. Our Adventures In
Missions teams, working in tandem with existing churches, saw thousands of
converts and disciples last year. We
also built many churches and homes. I
point to our emphasis on prayer as the primary reason for the fruit.

The fruit produced in the home churches back in the U.S. is
also noteworthy. A while back, STEM Ministries
surveyed its project participants after they had returned home. They found that both giving to and prayer for
missions doubled after people went on a mission trip. Prayer increases because people see in very
practical ways that it works. It is an
essential ingredient of STM projects.

Jesus said, “You shall be my witnesses in Jerusalem…and
unto the ends of the earth.”
Jerusalem represents our own back yard.
If the Church neglects its own local community in its pell-mell rush to
get to the ends of the earth, then it has probably romanticized the Great
Commission. You often hear people say,
“Why bother flying somewhere to help others when we have needy people
right here in America?” Rather than
brush off such criticism, we ought to deflect it through our involvement in
local ministry. The group that gears up
every year for another glorious trip beyond our borders but which slides back
into the rut of feel-good ministry-to-self during the rest of the year gives us
all a black eye. In fact, here’s a
categorical statement to chew on: Unless
your missions team is willing to first invest in a local ministry, it has no
business going overseas.

Begin with Jerusalem.
See people through Jesus’ eyes in your own back yard and then you’ve
earned the right to hop a flight somewhere.
Compassion for the lost begins with those who you see and touch every
day.

At the other end of the spectrum are those who are so
comfortable with regular nearby service projects that they have never
experienced the incredible blessing of cross-cultural evangelism and church
planting. The fact that, when you scan the world, so many full-time Christian workers are in the U.S., highlights the
disproportionate resources expended on an increasingly cynical
populace here in America.

U.S.-based ministry projects are a good starting point for
further involvement in Christ’s kingdom around the globe, but after our first
ministry project, we should ask, “How can I further challenge these participants?” People ask why I prefer
ministering in Latin America as opposed to the U.S. and I tell them it’s because the fruit is so much
greater there. Perhaps it’s because the poor
in places like Mexico are so absolutely destitute that they more readily embrace
the gospel.

Often a strong overseas project will result in a renewed
emphasis on local outreach. Back when I was starting AIM, Third Presbyterian and West
End Assemblies of God Church in Richmond,
Virginia used to jointly sponsoring STM projects. Adults and youth from both churches joined
forces to minister in various countries.
Both churches became missionary-sending bodies as veterans of STM projects
answer God’s call by pursuing careers as long-term missionaries. Both churches became leaders in
developing local outreach projects in inner-city Richmond as a direct result of
their STM programs.

I suggest we do a cost/benefit analysis on STM teams. Of course the
previously mentioned benefits of higher giving to missions and
greater prayer must be considered in evaluating the return realized by
investing in short-term missionaries. Beyond that, what is the value of
developing a new
generation of missionaries? Our
organization has found that by giving young people the opportunity to
see God’s
power working through them to bring hope to hopeless situations, they
can’t return
to their old self-centered dreams. Over time, they start to
become Great Commission Christians. STM experiences can generate vision
for career missions- most new missionaries have been on an STM before.

That said, more STM groups need to set their sights on projects
which
demonstrate a stewardship of funds.
Until leaders in our nation’s wealthier churches can stop spending
money
on mission trips just because it’s available, this criticism is always
going to
have some validity. Only groups that
have demonstrated their stewardship through past projects that have
born long-term fruit should be given the
opportunity to invest the kind of money which is required to fly to
more
expensive locations. Those high school
groups scheduling large teams to exotic locals in Asia, Russia, Africa,
and the
Far East should be subjected to greater scrutiny. I can think of very
few situations in which I
as a member of a missions committee would help fund such extravaganzas.
Most young people are far too distracted and ill-prepared to justify
that kind of expenditure. Those churches which have
allowed the funding pendulum to swing so far in the direction of STMs
that long-term funding suffers need to take a hard look at the fruit
they are producing.

Given a proper concern for long-term fruit, church leaders
should not be apologetic about the fact that short-term projects can be
costly. It is always going to cost much
more to do an overseas missions project than it would cost a comparable group
of national Christians to do the same ministry.
If we were faced with a situation in which both groups competed for the
same pool of money, this criticism would be a profound one. However, in most cases, short-term missionaries
are tapping into a completely different pool of money. Whether the monies are raised through
fund-raising events or simply come from money already budgeted for a vacation,
they tend to be over-and-above the funds otherwise given to missions. A good way to counter criticism of
their stewardship is for missions committees to place the primary responsibility for raising funds on short-term candidates.

Often STM teams have little understanding of the big
picture. A great gulf of perspective
isolates them from the long-term workers with whom they work. This perspective may be imparted through a
commitment by a missions agency or missionary to help prepare the group. STM groups certainly can be a distraction and
an inconvenience to those missionaries who have teams thrust upon them,
particularly if the teams are unprepared for the field. If a missionary does not have a vision for
how short-term missionaries can minister cross-culturally, then perhaps it is
better for him to “just say no” to an STM group rather than to run the
risk of incurring unintended consequences in accommodating groups out of a
sense of obligation or duty.

I have been a long-term missionary in the Dominican Republic
and in Indonesia – I’ve seen how intrusive people from back home can be who
come primarily to observe “mission life.” I’ve also led thousands on short-term teams
around the world. I’ve seen their
incredible promise both as an instrument to facilitate missions work and as a
tool to mobilize missionaries to go to the field for longer periods.

In truth, both the long-term missionary and the STM team
bring a gift to the throne of our Lord.
Long-term missionaries bring direction.
Short-term missionaries bring velocity.
Often our long-term partners are greatly encouraged by the infusion of
life and resources into their ministry. For example, I led a project where the Haitian pastor was thrilled with the injection
of growth and life that our short-term team brought to his congregation. He implored us to come back with even more
help next year. We did so and saw
even greater fruit result. We have the
kind of partnership in the gospel which enriches all involved. It is the person with a long-term commitment
to a community who plants a church and disciples its members. The relationships and vision they provide are
essential. They are like the rudder on
the ship, providing direction, steering the course. Short-term missionaries can be the wind in
the sails which give velocity and thrust to the enterprise. They bring with them resources, a prayer
base, and tremendous enthusiasm.

History has always been on the side of those who were able
to adapt to the changes which shook their world. The turbulence of the changes may have swept
them aside, but their ideas persisted.

The world is changing at an incredible pace as we hurtle toward the
future. Missions too must change. STM teams certainly have their
drawbacks when they adopt a flawed model. However, at their best, they
have proven to
be a tremendous tool in the hands of the church – a tool which
simultaneously helps disciple participants and helps reach the world
for Christ.

To read the blog that started it all, check out: Are short-term missions becoming faddish?