The Government vs the Huntington Beach Revival 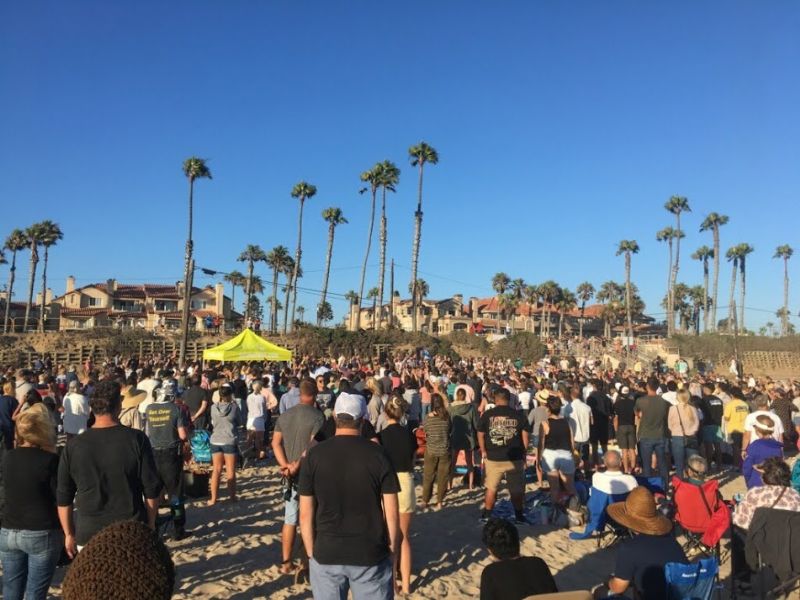 Down through history, in times of crisis, people subordinate their freedoms to their government. Democracy takes time and trust that a crisis doesn’t afford.

We’re seeing this happen now on multiple fronts. The government is taking on trillions of dollars of new debt to try to keep the economy afloat. And across the country we are seeing wildly different responses by politicians.

The city of Huntington Beach said in a statement that it “firmly supports the right of any religious group to worship,” but that they must follow permitting and safety protocols.

Saturate OC has been conducting revival services on the beach. Hundreds are coming to the Lord and being baptized. And the question is, who gets to decide if the people showing up on the beach are doing enough mask-wearing and social distancing?

Although Saturate OC asked people to wear masks, like other people walking around on Huntington Beach, those attending seemed to do a poor job of wearing masks. What to do?

a. The health dept could offer to help ensure that people followed guidelines.

b. They could talk to the Greens and help them modify their strategies.

c. They could shut them down.

“I think it’s more of a political statement that anything at this point, for people to actually shut down a worship service when there’s mass protests with hundreds of thousands of people in L.A. and then we’re getting highlighted in the news for spreading the virus,” said Parker Green.

We need to ask the question, where does this end? What if God is wanting to give us the hope in Jesus Christ that we need now. What if in fact he gave Jessi Green a vision four years ago of a revival where people repent and get baptized. What if the government was in fact shutting down a move of God?

“They kind of put us between a rock and a hard place because they’re saying churches, as a whole, that they can’t meet inside buildings because of the health codes, to go outside,” Jessi Green said. “So we’re just trying to find places to go outside to share the gospel and practice our religion, but then we’re being told the public city beach is not an option.”

“So where exactly is it OK, according to California municipalities and the state government, for me to practice my religion?” Parker Green said.

My question is not, “Should the Greens work with health officials to ensure a better protocol.” Of course they should. My question is, where does this end? In China the government shuts down meetings and locks up Christians. That is one end of the continuum. And we are on it. At what point do Christians follow the Chinese example?

Shouldn’t we as Christians be having a conversation about this?

Quotes taken from this article.

Apparently the Church is NOT Essential in Our Society

Tonight, despite the threat of arresting the organizers, the revival at Huntington Beach continue…
24 July 2020

Tonight, for the last time, thousands of people will gather at lifeguard station 20 on Huntingt…
03 March 2012

The Bible tells us, “The reason the Son of God appeared was to destroy the devil’s work.” We need…