The Heavenly Man comes to Georgia 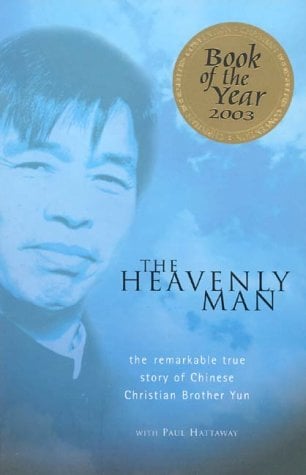 Today I’m going to go see Brother Yun,
author of the 2003 book of the year, The
Heavenly Man. He’s speaking at a
nearby church here in Georgia. If you
haven’t read the book, I recommend you do so – all things being equal, we need more evidence of the power of God here in America, not more skepticism. And hey – where else are you going to hear a Charismatic talking about the miracles of God in a large Baptist church in this day and age?

Yun’s testimony of God’s miraculous power is hard to discount. As one reviewer says, “It was as if I
was reading something from the Book of Acts. Unimagined miracles side by side
with heartbreaking hardship – happening daily half a world away.”

Inevitably he has attracted his share
of detractors, but co-writer Paul
Hattaway is known for his careful research on the underground church in
China and has documented the many miracles the book describes. The evidence is credible – I believe it. Here’s a summary of a few key scenes in the book from Tyler Ross:

In a time where anyone found with one
of the few Bibles in all of China would be publicly beaten and humiliated,
Brother Yun cried out to the Lord, prayed, and fasted on only a bowl of rice a
day, for one hundred days, for God to give him a Bible.

Miraculously, Brother Yun received his
precious Bible and immediately memorized entire chapters at a time. He then
devoted his time to the Lord and preached in secret
home churches, simply reciting Bible passages from memory. His on-lookers fell
to their knees and hundreds were brought to Christ.

Eventually the Public Security Bureau discovered the
clandestine church services and, at the age of 17,
Brother Yun was arrested for preaching the Gospel.

In the years to follow, Yun would be
beaten a countless number of times and followed constantly by the Public
Security Bureau. Though he had electric prods stuck inside his mouth, was
kicked on the ground for hours at a time with steel-toed boots, and was even
used as a dummy for martial arts training when he was incarcerated, Brother Yun
said, “The more pressure there was, the more fire and love there was to preach
the gospel.”