The martyrdom of Ezekiel 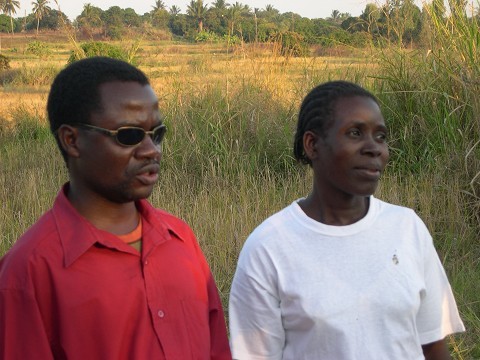 He told us about how Ezekiel saw all the orphans whose parents had died of malaria and decided to do something about it.  He and his wife Rita began to take them into their home.
He saw the plight of his Muslim neighbors and began to reach out to them, a dangerous thing to do in an area that is predominantly Muslim.
Ezekiel ‘s unorthodox ministry began to attract attention.  Muslim leaders in the area wanted him silenced.  He was disturbing the status quo.  And so, last October, three shadowy men pulled him off behind some bushes and stabbed him to death.
This is where the story begins to get interesting.  As any student of Christian history knows, “the blood of martyrs is the seedbed of the church.”  Ezekiel  left behind two disciples determined to carry on the ministry – his widow, Mama Rita, and a blind man named Peter (pictured above).
Mama Rita continued to take in orphans and care for them.  She and Peter have continued to expand their ministry, opening orphanages and planting churches. Though they owned little, they shared it freely with our teams and so impacted them that they declared it the highlight of their trip around the world.  Patrice Deaton and Angie Tibbo write about their experience in their blogs and Andi Wendel took the pictures and wrote the captions below.

Mama Rita’s house and the kids and ladies that live there.  It housed us, our stuff,
20 orphans, Mama Rita, and the rats.

Right outside Mama Rita’s house with the kids. Nightly dance parties took place
out there. The little ones really know how to shake their booty.

Me and Patrice sitting by the wall of the house, a common activity
at Mama Rita’s. The little girl Patrice is holding had an intestinal
infection and possibly malaria. We took her to the doctor, got her
five different medicines, and blood work done, all for $35.

Peter (our amazing and beautifully passionate about the Lord English speaking
blind contact, and relative of Mama Rita’s) and Mama Rita.

Mama Rita’s first son (by adoption) Jona. He is our buddy, and through people sponsoring
him while we were there, we were able to raise enough money for him to go to
school to learn English. He is an amazing guy who will be able to help out Mama Rita
and Peter much more once he’s learned the language.

Mama Rita. Oh she is beautiful. Absolutely amazing woman. She just feels like
home. Her scars are from her childhood village traditions. They were thought to
be more beautiful if they had scars.