“I remember sitting in a church in Wales, a congregation of about 400 were seated. As I looked around I     could see this vast army all sitting there with their shiny armor on (like the knights of old) they had there shields and weapons. The Lord said to me “Look at my army, see how shiny their armor is” and I sat their suitably impressed by it all, then He said ” The reason why their armor is so shiny is because they will not fight”, no dirty marks on them, no dents, nothing! “No one has taught them how to fight and no one has led them to the battle field.”

I sent it on to the squad and it became a word to rally around as they ministered to those caught in the sex trade in Ho Chi Minh City. They lived on the top two floors of a hotel whose first floor served as a type of brothel.  It has broken the team to see how these young women have to sell themselves. Team member Tara Bruce describes their experience. In quoting her, this morning’s blog runs a little long, but if you hang in there with me, I think you’ll find it enlightening.

A crucial moment that wrecked me was witnessing the transaction between the hotel boss and the prostitutes.  The boss returned the girls I.D. and then pulled out a book that had a list of the 30 prostitutes that work for the hotel.  The book kept track of their time in and out as the men are limited to an hour  with each girl.
The amount of time determined the amount of money the men had to pay.  The hotel boss was paid 250,000 dong by the man and then after the money was distributed the girl was only paid 20,000 dong, which is equivalent to one cup of tea with milk; bubble tea, a typical Vietnamese drink.  This is approximately $1.25.  This assessment of value and exchange of money filled me with utter sadness.  How is one girl’s innocence worth a cup of tea?
Our squad has been praying on the full armor of God everyday since before we arrived in Vietnam in expectation of the spiritual warfare ahead.  (Ephesians 6:13-19)  Sue Tandy taught me that in wars prisoners are always held captive behind enemy lines.  There are no prisoners in friendly territory.  Our squad has come together in agreement and has decided to walk behind enemy lines and release the captives that the enemy has stolen (Isaiah 61).   A battle has ensued and we are definitely getting our armor dirty.
The battle started the day I met Iris.  The night I saw her she walked down the dark corridor of the main floor of our hotel escorted by an older gentleman in red silk pajamas.  As the man opened the door to room number 7 she looked intently back over her shoulder into my eyes with this look of desperation and emptiness.  Her eyes told a story of innocence lost at the young age of around 15.  She didn’t speak a word, but her eyes screamed in broken despair and hopelessness.  At this one glance I broke inside.  I felt a deep compassionate love for this girl and at the same time a holy anger for what the enemy had stolen from her.  At that moment I intended to fight for her restoration.

A few of us gathered in the hallway interceding on behalf of the girls and the men enslaved and trapped in this addictive game.  We cried out, we read scripture, and we sang worship songs in front of room number 7.  We continued to walk up and down that hallway claiming the territory for the Lord as numerous girls and men went in and out of the rooms. 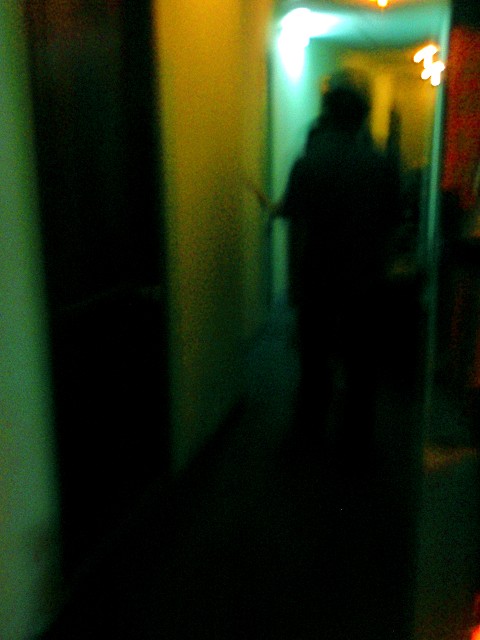 With every hour that passed we pressed in harder and harder.  It was difficult to watch as Iris came out of her room and left the hotel.  We smiled at her as she walked down the street.

Then, another man in silk pajamas followed her down the street and beckoned her to come back with him.  She came back and was sent into another room with this old man and another young girl.  Four of us prayed at the entrance of the hotel as women and men continued to come in and out.
As we stood there Iris walked out of the lobby once again, but this time her face told a new story.  She was completely broken and frazzled holding back tears and hurriedly walked passed us and jumped on the back of a moto leaving down the dimly lit street.
After this night of warring I knew that the battle had just begun.  I began “Fire in the Night,” an all night prayer meeting where 2 people from our squad would sign up for each hour of the night to combat the spiritual warfare and prostitution in the rooms below.  We have intercession meetings in the same place every morning at 6:30am.
And, now we are currently preparing for an all night prayer and worship meeting with our whole squad.  We are coming together on Sunday evening with a time of prayer, an hour of worship and different rooms with stations such as communion, meditation, creative worship, information on sex-trafficking and Buddhism.  We are renting out a room on the main hallway, which is normally used for prostitution all night long and that room will be a prayer room with candles and prayer for the girls right outside those walls.

Karen and I have a special interest in this World Race squad because we are their coaches. We read all their blogs (32 of them!) and help them to process their experience. During their year abroad, we are traveling to debrief them seven times (we’ll meet them in Cambodia next week). So we joined them in their prayer vigil.  And this morning I awoke to read Pamela Philp’s summary of what had happened:

Last night was a night of power. The power of the Lord had shown up, and He is taking this hotel.

Putting my hands against the walls, knowing that on the other side there is a man and a woman who are so lost in their identities. A women who has lost her value, her worth. She has believed all the lies that have been poured over her life, and she cant escape. She thinks that this is all she has to offer, and so she has settled. She’s settled for abuse and manipulation, because no one has shown her love and truth. Then there is a man, whose idols now control his life. The idol of lust is overwhelming and he cant stop giving in. He leaves his home, even his family, for an hour to feed this idol. By controlling and abusing another human being he thinks he is a man; he is feeding his idol of power. He doesn’t know about his call to be a leader, his call to love others like a father and to be willing to lay down his life as a protector.
My hands start to shake as I press them harder against the wall, and tears fall down my face as my heart breaks, as I start seeing them through God’s eyes. On the other side of this wall are a man and a woman who are so completely broken. So what can I do? And what can I say?
The darkness is slowly being lifted. The devil is scared. He is losing his power over this place and he knows it. During our first hour of worship together we had people pounding on the walls for us to be quiet, but we just sung louder. There is a different feel in our hotel. We have no fear except fear of the Lord and we know Satan can’t touch us. So, for our final week in this place we will continue to go into battle. We will continue to spend our nights in prayer, breaking down the strongholds that darkness had, and proclaiming this place for the kingdom. The fire of the Lord is here and it cannot be contained.”