The sex trade will break your heart

The World Race team we coach just arrived in Thailand en route to Viet Nam and then Cambodia.  One of the things they’ll be doing is ministering to young girls caught up in the sex trade.  It can be confusing, tumultuous, and often horrific.   Jim Larson, my suite-mate from …
By Seth Barnes
12 September 2008, 12:09 am
By Seth Barnes
12 September 2008, 12:09 am 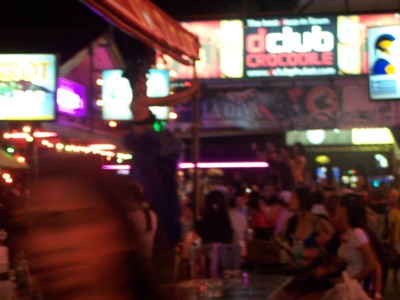 The World Race team we coach just arrived in Thailand en route to Viet Nam and then Cambodia.  One of the things they’ll be doing is ministering to young girls caught up in the sex trade.  It can be confusing, tumultuous, and often horrific.
Jim Larson, my suite-mate from Wheaton College (circa 1976) has started a ministry with which we partner called The Well – a ministry of Servantworks.  They pull bar girls off the streets and get them living in community and getting discipled.  He and his family are heroes who have to deal with heartbreak on a daily basis. Here’s his recent blog entitled “Last Thursday”:

Bpu told me that her cousin was once again badly beat up by the guy she
has been living with off and on for over a year.  She ran to Bpu’s
apartment, and cowered in the corner, crying at every sound she heard, [afraid]
that the boyfriend was coming after her.

Pim, drop-dead gorgeous with an even more stunning 8 month-old girl,
told me how her husband has been staying away nights, and shows little
interest in either her or his lovely daughter.  He is almost certainly
using and dealing drugs.

Pear, the 14 year-old we’ve had in her home who ran away in April, called several times asking to come back.

June told me about the memory stuck in her head of a guy holding a gun to her head while he raped her.

If we are to help Bpu’s cousin, we need to reach her mother, 7 hours
away, and get her to stop allowing her daughter to sell herself.

If we are to help Pear again, we have to take her back in our own home,
because we really don’t have an appropriate place for her elsewhere and
don’t know of one that would take a troubled girl her age.

If we are to really help Pim, we need to start spending time with her
boyfriend, who began his relapse when he lost his already low-paying
job–a typical scenario for young uneducated Thai men.

Na and June need lots of counseling, prayer and patience.

Friday morning I arrived at The Well Center 1 at
8:10 to hear the sound of our students singing for morning worship.  My
heart leapt.  They are so dear and precious, and their brokenness
doesn’t take away from that one bit.