The story of how baby Moses died

For those of you who followed the baby Moses saga thru my blogs, you may have wanted to hear more about how he died. We have a team of college-age students over there along with my son’s World Race team. Two team members held baby Moses thru the night as he lay dying. It makes me sigh and tear…
By Seth Barnes
17 March 2008, 12:03 am
By Seth Barnes
17 March 2008, 12:03 am

For those of you who followed the baby Moses saga thru my blogs, you may have wanted to hear more about how he died. We have a team of college-age students over there along with my son’s World Race team. Two team members held baby Moses thru the night as he lay dying. It makes me sigh and tear up thinking about it again. Michelle Goette shares the story: 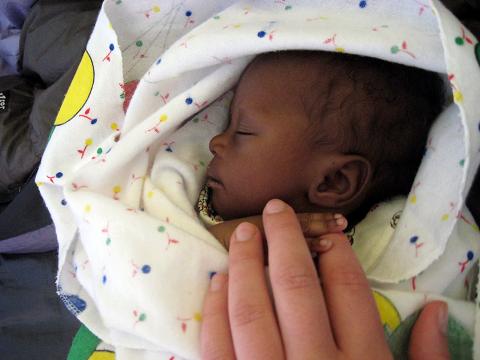 The World Race team met
a woman who is about to die from AIDS but is still trying to help her
family. She is too weak to do much but she is trying. When they laid
eyes on her tiny baby that she could no longer feed, they knew they had
to do something. They asked her if they could take the baby for a few
weeks to nurse him back to health and she agreed. The team named him
Moses and lavished him with love. I had never seen a baby so small and
so loved.

A couple weeks later he got very sick and they had
to take him to the hospital. They took turns watching him but needed
someone to take the night shift so Elisa and I volunteered. I packed a
bag with snacks, my Bible, and a sleeping bag and was off. When we got
there, we got a quick briefing on how to give him his medicine and
where to get milk and we were on our own. The hospitals here in
Swaziland are already rough places. There are so many patients just in
one big room and only two nurses. There is no air conditioning and no
beds for the moms. Every mom did her best through the night. Some
huddled up underneath their child’s bed to get some sleep. Some laid on
the concrete outside. Some had to hold their child all night so they
got no sleep at all. There was probably only 15 seconds the whole night
where there wasn’t a child crying. It was rough, to say the least. I
was thankful I was there with a friend so we could take turns taking
care of Moses.

About 4 am, Elisa woke me up for my turn again.
She warned me that he was getting worse and needed extra care. I went
to him, changed his diaper, wrapped him up and said a prayer. Every
couple minutes I would stand up and rub his stomach just the way he
liked it. Around 5 am, I noticed that his chest wasn’t going up and
down any more. I was afraid he wasn’t breathing. I picked him up,
rubbed his chest and he took a small gasp of air. I was about to panic
so I went to get Elisa. She saw what I did and the other mothers around
told us to get the nurse. By the time we got back with the nurse, he
had stopped breathing. The nurse simply said, “He is gone. I’m sorry.
He has died.” And she took him away.

I thought about not
posting this. It is a hard thing to read. But then I decided that it is
truth and people need to know the truth. This is the AIDS pandemic. It
is not numbers on a page, it is mothers who can no longer feed their
babies and babies who die without a chance at live. Moses was one of
the most beautiful babies I have ever seen and I have hope that he is
in heaven dancing before the throne of God. But I also have sorrow
because I know that Moses will not be the last one who dies because of
AIDS.

Please consider the action you should take concerning
AIDS. Maybe you should volunteer, give, go, pray, visit, lead, speak,
or something. Just let it be something. Don’t read this and say, “Oh,
that’s sad.” Then go on with your day and life. Take some kind of
action because there are those whose lives might just depend on it.