The story of my college romance

On this mother’s day, I’m thinking about romance – after all, that’s what gets a woman moving down the road to motherhood. And this being a blog about spiritual things, it’s worth noting in passing that God wants to romance us. If you’ve never been romanced, this may be a hard concept to grasp….
By Seth Barnes
13 May 2007, 12:05 am
By Seth Barnes
13 May 2007, 12:05 am 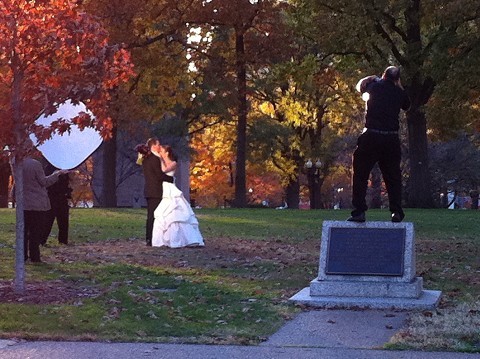 On this mother’s day, I’m thinking about romance – after all, that’s what gets a woman moving down the road to motherhood. And this being a blog about spiritual things, it’s worth noting in passing that God wants to romance us. If you’ve never been romanced, this may be a
hard concept to grasp.

Fortunately, I’ve
had a little experience. Here’s my
story as a tribute to the mother of my children – the only woman in my life to absolutely take my breath away.

The direct approach wasn’t my style. I needed some kind of an excuse. Fortunately, God provided me with one. Her best friend, Debbie, liked my best friend,
Dave. Soon the four of us found ourselves
regularly studying together at a table downstairs in the library.

Gradually the facts came out. She was from the Chicago area. She was majoring in Elementary Education. Then, horror of horrors, out came the
revelation that she had been dating another man for three years. My consolation was that he was attending
another school, leaving me room to swiftly move in for the kill.

Karen and I began seeing each other unofficially. We flew kites, we went for walks, we studied and
ate pizza together. It was a great fall
semester.

But what I didn’t understand is that Karen was actually torn
between her two suitors. One evening she
came walking into the library. As usual,
my heart jumped as she sidled up to where I was seated and said, “How about if
we go for a walk?”

“Great idea,” I thought. So, out we went into the frigid night air. I remember the snow was coming down and crunched under our feet. Our breath hung in the air as we walked
together. Karen was fishing for
words. She had something on her mind
that wasn’t easy to say. Finally she blurted it out: “Seth,” she said, “I
don’t quite know how to tell you this, but I’ve decided to get engaged to this
other guy.” Then, almost sheepishly, she
showed me the rather impressive diamond ring he’d given her.

This was like something out of a bad chick flick. What? I
already had made up my mind that she was the one for me. In my version of things, we were together for life. For weeks I had been plotting how to win her
heart. Rewind the tape – this was going
off script! I felt like an idiot.

I’ve always been something of a poet, but after that, I
wrote poetry in prolific quantities. How
could I express the pain that I felt? I
was a mess. I still saw her and
periodically and would show her one of the poems so she knew how forlorn I felt. My friends tried to cheer me up, but there was
no hope. Life was bleak and I was beyond depressed. I told my mom, “I don’t understand it, but I’ll wait for her. I know this guy isn’t right for her – I may have to wait five years before she realizes it, but I’ll be there.”

Finally, after a month of this, she recognized that she’d
made a mistake. She told me on the phone
that it was over with the guy.

Wow! Strike up the
brass band! It was time to celebrate! I can still remember the incredible exhilaration
I felt. We began a hopelessly romantic and
magical courtship. Every day,
hand-in-hand, we went walking somewhere, talking about life as we walked. We talked about everything under the sun. I was endlessly curious about her. We would stay up till early morning studying at the local round-the-clock diner. We’d go walking thru the arboretum together. We laughed all the time and were transported out of that suburban campus setting to a place that seemed to exist outside of time and space.

Two years later, we were married and living in Indonesia. Since then, our lives have been full of adventure. We’ve traveled the world together. We’ve seen amazing sights. We’ve raised five children. And now as the last of our children approaches 18, we’re entering a new stage of life still very much in love. She still puts the sparkle in my day. Her laugh is every bit as infectious as when I first heard it in Traber dorm nearly 30 years ago.

What a gift God has given me. Maybe that’s why I’m a sucker and cry at the end of romantic films when the guy goes running thru the crowd and at last embraces the girl as the camera circles around them. I’ve seen that you

can have your dream.

Here’s a sonnet I wrote for her during that tumultuous time:

Captured there sits my bluebird will,

Where once on sky’s soft breath it ranged and sailed,

Brought down by an arrow that did not kill,

But left a throbbing heart impaled.

Behind the bow shone sure eyes goddess green,

Guided my will to a carnation cage –

Luscious constrainment, though it seems unsage

To start searching for fledged freedom there.

This time I have found it, to me it talks:

Only placed in a cage which I see

Can my winged will in warm rapture fly free.