The tale of the white pig

The other night a missionary named John Cutts came by the Almand home in Gainesville and told an amazing story. It’s a little long, but worth it. Erin Almand took notes and wrote it out.   John Cutts lives with the Moni tribe in West Papua. He has lived there since he was two years o…
By Seth Barnes
15 August 2009, 12:08 am
By Seth Barnes
15 August 2009, 12:08 am 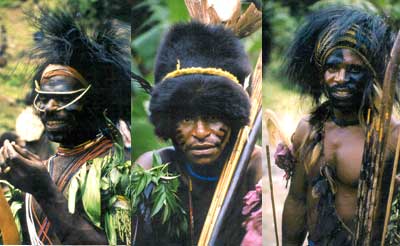 The other night a missionary named John Cutts came by the Almand home in Gainesville and told an amazing story. It’s a little long, but worth it. Erin Almand took notes and wrote it out.
John Cutts lives with the Moni tribe in West Papua. He has lived there since he was two years old. John’s parents were missionaries to the Moni and started translating  the Bible into Moni. John knows their language fluently and continues the translation today (only 12,000 verses to go!).

The Moni had never seen a white person before, yet they had a strange legend in their culture. For generations the chiefs taught their tribes that white people like ghosts who would come someday. These ghost people would teach Hazi (eternal talk). They would tell the tribes how to live forever. No one knows how that legend started or why it circulated for so long. It was an important part of the Moni culture long before the first white man ever showed up.


First Encounter
The first time a white person showed up on the island, the news spread like wildfire. The chief of the Moni people heard that a white ghost had arrived and was speaking to a nearby tribe. The Moni chief walked through the jungle for three days to see the white ghost. Because the missionary was visiting another tribe that spoke another language, the Moni chief couldn’t understand everything that was being said. After the missionary was done talking, the chief asked him to come to his village.
The missionary couldn’t understand him, so he gave the chief a bar of soap and a glass bottle of merthiolate, which is like iodine and a popular medicine of the day. The chief walked back to his village and called all the people. He told them that a white ghost had given these gifts to him, and they were going to let his people live forever. Then he shaved the bar of soap into pieces and gave them out to the tribe, telling them to eat them. The people did, but there wasn’t enough soap for everyone. So then the chief gave the people who didn’t get any soap a sip of the merthiolate. But still there wasn’t enough. So then the chief took a rock and smashed the glass bottle of merthiolate, and gave a little piece of glass to everyone who didn’t get some soap or merthiolate, and they ate the glass. But the people kept dying and the missionary to the other tribe never showed up.
John’s parents walked into the village in the midst of all of this.

But there is a way out. If the tribe with fewer deaths decides it doesn’t want to fight anymore, they can have the Ceremony of the White Pig. The tribe that has the fewer deaths will pick one of its warriors to sacrifice. The tribe selects the warrior, binds his hands, ties him to a spear, and hands him over to the other side as an offering of peace. It is called the Ceremony of the White Pig because pigs are the most valuable things in their culture. Pigs are a sign of wealth, used to buy brides, and provide feasts during times of festivities. The White Pig (the chosen warrior) is given to the other tribe, and they kill him. Then there can be peace between the tribes again. 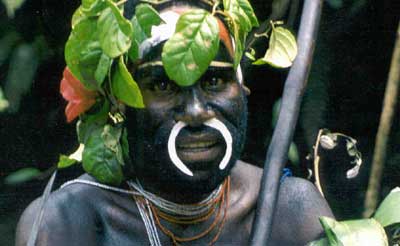 When the Cutts learned about this, it was the perfect vehicle to communicate the idea of Jesus as a sacrifice. They explained, “God wants peace with mankind so badly, He gave His best warrior and only son as a sacrifice so we could have peace.”
At last the Moni people understood who Jesus was. They responded in droves.
John Attends a Ceremony
John gets invited to a Ceremony of the White Pig. It’s a really big deal for him to be invited and to be able to witness the ceremony. So John arrives at the place where the ceremony is happening.
The two tribes are whooping and hollering and dancing around because they are so excited to enter a time of peace. The warrior who has been chosen as the White Pig is in the center of this giant celebration, hands tied to a spear that’s stuck in the ground.
John is watching all of this, thinking, “What am I supposed to do? Do I cut the guy loose? Do I stop them and tell them it’s wrong? Do I say, ‘Take me in his place?'”
And as he is thinking and praying, all of a sudden, four warriors come running into the clearing screaming and yelling! They’re carrying a large, live wild pig tied to a stick. Then, from another part of the jungle, another four warriors come running out with another boar. And then another four come out. This keeps happening and they keep laying out the boars, one after another in front of the other tribe. Eventually, 63 sets of warriors have come out bearing of 63 boars!
The tribe that caught the pigs asks the other tribe if they will accept the 63 pigs as a gift instead of their warrior as a sacrifice. They are Christians and they say that they know now that they shouldn’t sacrifice their own because of Jesus. Even though it’s a serious tradition, they’d like to give 63 boars in his place.

The other tribe huddles together and talks about it for awhile. They finally come back and say, “We will take your wild pigs in place of the white pig!” And they cut him free.

Now, how amazing is that? And of course the allegory is that we are like the warrior, tied to a spear, about to be sacrificed because of our sin, and Jesus takes our place and cuts us free of our bonds – he’s the ultimate white pig!
What Jesus did on the cross may have saved us, but we tend to take the gospel for granted – we’ve heard it so many times. Like the Moni people, we need to hear it in the language of our heart to embrace it.
John Cutts website: http://villageheartbeat.org/