The following story happened to me in 1991. I’ve written a book of stories like this one called “Revolution of the Broken Heart.” One day maybe I’ll publish it. 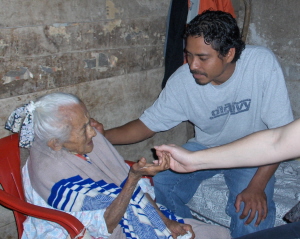 Paradoxically, months after Fidel died, I found myself sitting beside another deathbed high in the Sierra Madre Mountains, in the village of El Derramadero. But this encounter left me uplifted as few other experiences ever have. The people of El Derramadero have a history of persecuting the church. Indeed, when our group first arrived in town, we were chased out by town people throwing stones at us.

When we returned the next day, I was able to view the site where the proposed church was to go. The people who lived around the site supported the project. One of them, a woman whose name I now forget, but whose face remains indelibly printed on my memory, was the mother of thirteen children. When I walked into her front yard, the pigs and chickens scattered.

She paused in the midst of her work and fixed a big smile on me. I explained why we were there and introduced her to my then six-year-old son, Seth Jr. Catching him quite by surprise, she grabbed his blonde head between her two weathered hands and squeezed his cheeks in delight. Seth Jr. just gazed up at her, wide-eyed, unsure of what to do.

On the second day of the project, Beth Jacobson, an occupational therapist who was assisting me, walked up and exclaimed, “You’ve got to come meet this old lady I’ve been talking to. Her name is Petra, and I believe she’s about 98 years old. She hasn’t been able to eat for a month now and is dying. I’ve been praying for her, but she’s been ministering to me even more. Come over and meet her.”

Petra’s two-room adobe house was very dark inside except for the shaft of light that fell from the window to the bed where Petra lay. Beth and I pulled chairs up to the bed and greeted Petra. She looked to be about the oldest person I’d ever met. She peered up at me with wizened eyes. The work of living was an obvious moment-by-moment battle for her. She was frail, but oddly unbowed. An air of holy victory seemed to infuse her tortured breathing. Though I had no idea what she would say, when she began to speak, reverence was the only appropriate response. 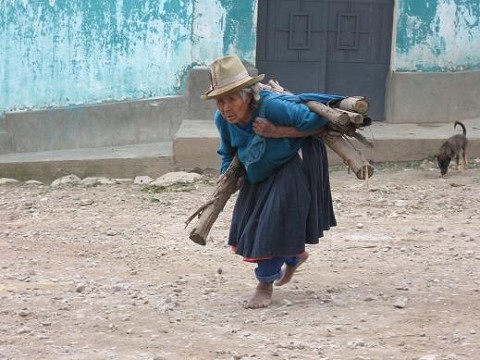 “I am Petra,” she said in whispered Spanish, pausing for a breath. “I am a servant of our Lord and Master, Jesus Christ….I have known His grace and His mercy for many years….It has been my privilege to roam these hills preaching the good news that all those who call upon His name can be saved….What a master I serve! He is altogether wonderful….His name be praised and lifted up….Though I know my time is short and I can barely eat or drink, I thank Him for the life He has given me.”

Neither Beth nor I knew what to say. I felt somehow unclean and small. After a silence, I asked her more about her life. She obliged me with answers, but always she turned the conversation back to the One to whom she was devoted. Her life had so narrowed in focus that only one thing remained, and that was her relationship with Jesus.

So often we hear sermons on the subject of completely abandoning ourselves to Christ. We live in the gap between the biblical ideal of holy living and our own guilty puttering in the well-worn ruts that comprise our lives. Yet here in flesh and blood before us lay one for whom no gap existed. She could say with Paul, “For to me to live is Christ and to die is gain.”

It was enough simply to sit in her presence, to glean from her communion with the Lord. At length we prayed for her. I can’t remember if we prayed for her healing, but perhaps we should have prayed for our own healing. Here we crawl across this dark planet, half the time bumping into walls and not knowing what we’ve hit. We pray for spiritual sight, yet seem to be perpetually tapping our blind man’s cane in front of us. Petra was seeing. Her physical eyesight had grown dim, but spiritually, her vision was acute.

Both Beth and I were abashed by the holiness of the moment. Tears were the only appropriate response. When our prayers were done, we looked up and dried our eyes. Petra motioned for me to come close. Simultaneously, she struggled to sit up in bed, itself a Herculean task. As she sat up, I wondered what her intent was. Did she want to give me a hug?

She began to fumble for something that hung around her neck beneath her blouse. She struggled to pull it out and show us.

At last she pulled out a woven cloth amulet closed up with a small drawstring. She opened the amulet and began talking. “For much of my life, I have wanted to see a church built in our little village of El Derramadero….Though most of my ministry has been outside this town, my heart’s desire is that we would see a church built here….I don’t own much, but I have saved this coin and I wonder if you would use it to help build a church here.” Having said this, Petra pulled a large, 5000-peso coin (worth about $3.50 at the time) from the amulet and placed it in my hands.

What could I say but, “Yes, I will.” Suddenly, it was as though I were transported to the first century A.D. Here before me was the widow contributing her mite to further the Kingdom. Anything I might give to the people of El Derramadero would pale in comparison.

A few weeks later, Petra died, but not before the walls of the church she had prayed for all those years began to rise up out of the ground. Petra seemed to have walked with God so long that death was just a natural last step toward Him. What an example of one who has fought the good fight and finished the race so well!

God is not willing that any should perish. As a seed must die to bring forth new life, so Petra’s giving and dying brought the Kingdom nearer in her corner of Mexico.