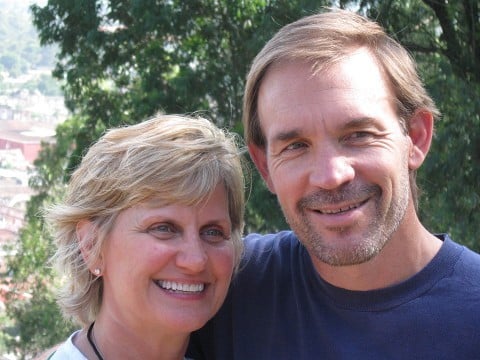 Karen and I just returned from Antigua, Guatemala, site of our first debrief with the World Race team we’re coaching this year.  One of the themes we’re helping them work through is that of their core identity.  Many are working through the notion that they have based their sense of identity on unstable and impermanent things. I love reading their blogs; some are quite brave in the way they process this struggle publicly (see Melanie’s blog for a great example).

Many of us go through life feeling like we’re not OK. At a fundamental level, we feel inadequate for all that life throws at us – we’re insecure, guard up, on the defensive. We don’t feel safe and have difficulty trusting people.  We don’t feel whole; we feel like we’re missing something, but don’t know how to get it.

Where does this feeling of inadequacy come from? Some people come to the conclusion, “I’m not OK” at an early age and never do make it to safety.  Others of us suffer a trauma along life’s road and struggle to get back to positive ground.

First source. All of us to a greater or lesser degree receive messages about the safety of the world from our parents. This is the first and strongest of three sources of information about our identity. So much of our view of the danger levels of the world around us come from the way our parents treated us in the first five years of life. Nurture in the form of touch of all kinds, words of affirmation, and focused attention are the three things that make the greatest difference.

As a point of contrast we can ask, what happens in their absence?

Ted Turner is an example of someone who is on record as saying that a measure of insecurity is a good thing. Where did he get this view?  His dad killed himself when he was 24 and the insecurity of that traumatic event must have become a powerful goad to succeed. Inside he must have thought things like, “I am not going to end up like that. The world may be a dangerous place, but I’m going to beat the odds.”

And in fact, Turner, in many respects has beaten the odds.  He is fabulously wealthy, is a philanthropist, and has assorted interests as an environmentalist and a yachtsman.  Yet while Turner may be one of the richest men in America, he made a shambles of his personal life.  He divorced three women and when his son didn’t perform to expectations, he publicly fired him*.

Children who never receive this foundation of nurture often struggle with a syndrome known as attachment disorder.  Because they never bonded with a parent, they struggle to give themselves fully to other people.  Expecting to be rejected, they often reject others first before they endure the pain of rejection.

A second source of identity is the conclusions that we draw about ourselves based upon interactions with the world.  Because we form these conclusions using our own personal experience, the conclusions are often at odds with reality.  In other words, they are lies.

If, for example, you are continually picked on at school and are called “ugly” by your classmates, you may begin to see yourself as actually being ugly.  The reality may be that you have the features of a model, but if you keep replaying the “I’m ugly” tape in your head, then that is how you will see yourself.  By replaying these tapes over and over again, the lie becomes your reality.  Rehearse failures enough and you become one.

All of us have inadvertently embraced lies that adversely affect our identity.  I strongly recommend getting Neil Anderson’s Victory Over the Darkness (followed by Robert McGee’s Search for Significance) and praying through it.  Many people are oblivious to the power of lies in their lives.  Jesus came to set the captives free and that includes those held captive by lies.

If you feel like you’re living in deficit-land, do yourself a favor and start taking authority over this area of your life.

A third source of identity is what Ross Campbell calls your “emotional tank.”  This is your day-to-day sense of angst or well-being based on what people tell you about yourself and what you accomplish.  Many people go through life with empty emotional tanks.  Their parents may have raised them well, but they’re stuck in a place where most of the information about themselves is negative.

Take an objective look at your life.  You can’t do anything about your bummer of a childhood.  But you don’t have to believe the lies spoken about you as a result and you don’t have to live and work in a negative environment.  God says you are his child and wants you to experience and rest in his love.  Only there will you find your true identity.

*I figure that he was sending his son the same message his dad sent him.