Tornado in our neighborhood 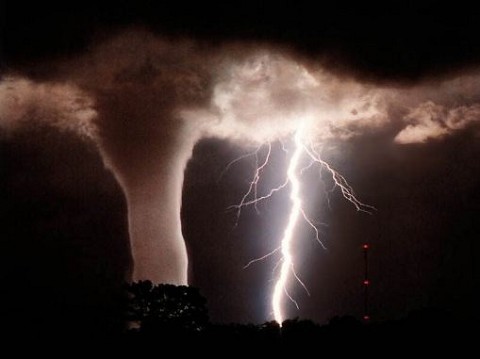 You know, some months go by and I look back and think, “It’s like a tornado has whipped through my life, turning everything upside down.”  Several years ago, here in Hall County that literally happened.  I was due to drop Talia off at school at 7:30 a.m. on March 20th.  If the tornado had arrived an hour later, she and I would have been in its path.
As it was, a number were left dead in a trailer court just across from the school and an empty school bus was crunched into a ball and perversely deposited on the school roof.  On our way to school, Talia and I were turned back from seeing this by a patrolman who had just arrived on the scene.
Yet in the midst of the devastation were stories of grace and whimsy. Our former neighbor’s dog went for a “ride” in his dog house, yet was unscathed.  A woman from church saw her home disappear around her, leaving her crouching in a bath tub.  And the Brumby family shared the following harrowing story:

Our family felt a strong conviction to act as servants to those less fortunate than us in regard to the tornado victims in Hall County.  We were led to a home school family in need of everything except their faith!  Many individuals participated by providing home essentials, toys, clothing, food, reading materials and appliances.  All this was greatly appreciated by the Roper Family.  I must admit that we felt good about doing this for someone else.  However, we received much more than we ever thought of giving.

Mr. Roper’s family had no warning other than the sound of a train upon them.  Mrs. Roper told her children to come at once, which they did.  Huddled in their bathroom, the four family members literally clung to their floor covering.  The wind speed reached 300 mph sucking out walls, all household items, pets and flooring.  The children distinctly remember looking up and seeing angels pushing the four family members down with their hands.

The flooring was ripped up everywhere except from the room they were in.  Graham, the 3 year old little boy suffered from head trauma.  Near the same time a rescue truck had been dispatched to the elementary school you’ve seen on TV.   However, as the driver headed toward the school the firetruck came to a halt near what used to be the Roper’s house.  All systems were “GO” on the rescue truck, but it wouldn’t budge.  At that moment the rescue driver heard screams for help.  He helped keep Graham alive until emergency units could arrive.  Things looked bad.

Both the hospital staff in Gainseville and Egleston specialists agreed that the little boy had a puncture through the skull & into the brain tissue.  However, once the surgical team cleaned the wound amazingly the puncture through the brain tissue could not be found!  The surgical team and all other medical personnel could not explain what had occurred. However, we can !!!

I pray that as the time flies by that you are redeeming your days.  We are the lucky ones, we know Jesus and have chosen to follow His call to make Him known in all the world.  Our lives have the purpose that the world desperately needs.