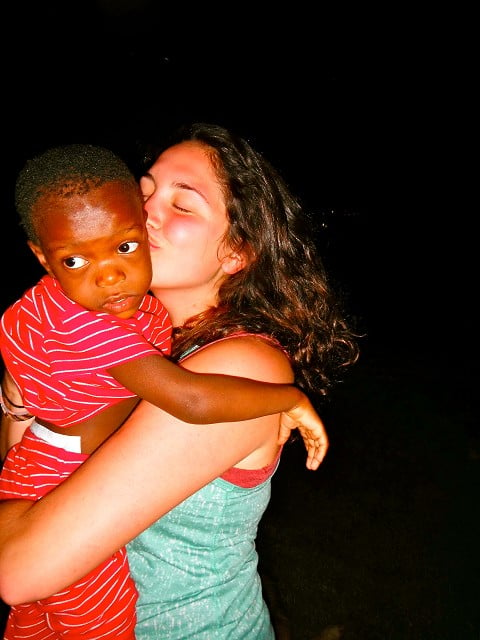 As we enter 2012, isn’t it time we recharged our faith?
We know we serve a powerful God, but maybe we haven’t seen his power lately.
Maybe you’re like Karen and I, waiting 20+ years for the healing of a daughter that hasn’t happened yet. We get exhausted praying and we need stories like Fea’s to recharge our faith.
As Kristen Aperfine tells it, Fea had never walked or talked. But last week as God showed them how to pray, they watched him heal her:

Fea was found in a trash bag in the middle of a field when she was only a couple of weeks old; she is now 3. She has cerebral palsy because she was deprived of air for who knows how long.
She is constantly drooling and can’t form any words. She has little to no control over her bodily functions. She can barely hold her head up, her arms are constantly folded in toward her body and her hands stay clenched in a fist; she doesn’t have control over her fingers.
One of her legs is about 5 inches longer than the other one, her feet are turned over in a way and she is not able to put her feet flat on the ground.
We knew that because of our faith God would heal her. She is His, she is His child, she is His daughter, His bride, His beloved. He gave her a voice and He wants her to use it! He wants her to be able to run, jump, skip, play with the other kids.
We brought her into the house where the volunteers live. We began to pray over her. Prayed for healing, for strength. It was so encouraging because I would be hearing a word from the Lord and then someone else would be getting the same word. It was like God kept confirming,
“See Kristen, I am speaking to you, you ARE hearing MY VOICE, continue to listen”
We all had our eyes closed praying to God and then he just told me:
“You are asking for a miracle, yet you close your eyes, OPEN your EYES and WATCH me work! Believe that you are going to SEE it Happen!”

With this we all opened our eyes we waited knowing that God was going to show us something, we were going to watch Him work. And with that we saw that leg that was about 5 inches shorter than the other GROW until it was the length of the longer one! PRAISE THE LORD!

Side note: The whole time we had been praying Fea had not drooled one time! Her usual never ending pool of drool was completely dry.

The praying continued. Soon she began saying our names! This child had NEVER spoken a single word in her whole LIFE! There was a carpet on the floor (it had animals on it), she began pointing to the animals and saying what they were… “Elephant, Lion, Giraffe” What! She knows animal names!!

Her arm muscles began to loosen and little by little they fell to her side. Her fingers became unclenched and she began grabbing things around her.

“Why are you waiting to see some drastic transformation in her body before you let her try? You say you have the faith that I have healed her, yet you aren’t letting her up to actually try and walk. If you truly believe she is healed then have her WALK, give her room to WALK. You are waiting to see before you actually believe! Believe she is HEALED! Believe it enough to TEST IT!”

Moment of truth. We all backed away from her. She had NEVER walked before. She can barely crawl. She was on her knees hobbling from one person to the next, trying to grab hold of her. She was going from person to person trying to get someone to hold her.

And then it dawned on me. What would I feel like if I had never walked, never talked, never crawled, never been able to do anything in my short life and these strange women were proclaiming things over me and telling me that I can walk! Would I believe them? Probably not.
Then I realized she needed truth spoken into her. I looked in her eyes and began telling her YOU ARE LOVED, You are Gods DAUGHER, You are BELOVED, You have an INHERITANCE in heaven, He wants you to WALK, He wants you to SPEAK, he has a plan for YOU, you have a STORY to tell! Over an over! Do you know you can walk Fea? Do you know God Loves you? Do you know Jesus DIED for YOU!

She lifted her arms, looked to the sky and said “Amen!”

It was time to take her outside. God wanted us to TEACH her how to walk. Standing behind her, I barely touched her with my fingertips. The kind of trick your dad plays on you when you learn how to ride a bike, you think he is holding on but really he has already let go and you are riding on your own. She started with little steps, slow and cautious. Then little by little it got faster. Her little steps became a run. I was still afraid to let completely go of her. I didn’t want her to fall on her face. Again the Lord calmed my nerves.

“Kristen, let her go. Do you believe she is really walking? ‘yes’ Then let her walk, let her run’ ‘but what if she falls?’ ‘Did you fall when you learned to walk? She will be OK, She will get up and she will walk again. Even if she falls it doesn’t mean she is not healed” ‘ok God, ok, you have her.’

PRAISE THE LORD! That little girl was a moving like never before. I looked at her “FEA Jesus healed you!! Jesus LOVES YOU!” She started jumping up and down and screaming sweet praises.

Two of her orphanage brothers that had watched her grow up came over and were in awe! “How, what, when, Fea? Did Jesus do that?” One boy told the other “See I told you God was real!” They then asked “Does God only do miracles at night?” sweet sweet boys! They both accepted Christ in that moment!

Fea’s story will be told all over the world! And every single day she will continue to get stronger and stronger.  Praise God for his daughter!