‘We are Watching Our Children Slowly Die’

He wanders around the red soil, dragging his feet and observing life in the camp. His hand touches his head often, like he is deep in thought. Eyes water, nose runs, and legs have sores that won’t heal. He is a refugee. He is a refugee child. Wise beyond his years, he waits with the rest of the camp for life to move. He waits for food, clean water, medicine, opportunity, hope, movement. They wait.

Dreaming of what was, the longing to go home is strong; but home is a war zone full of death. Executions, rape, threat of ambush, and complete devastation of daily life. The people I meet, ran with what little they could, many walking for months to get to a place of safety and refuge. Sadly refuge is only a temporary state for them. After the plot of land and the monthly bit of food is given, it is almost like they are forgotten. At least that is how they feel.

“All they bring us is food, but nothing for the trauma.”

The women who had to flee without their husbands, due to death or unknown whereabouts, are extremely vulnerable. Men will claim them as there own, forcing them to do things to get food for their kids or other supplies. Those without husbands also have no hut, because only the husband is allowed to construct homes. They sleep outside with their children, though sleep is futile.

Many are ready to pack up and risk death going back to South Sudan. Here in the camps, they have no jobs and no way to make a living. They are unable to grow their own food, due to rules and the soil being too rocky. They can’t afford supplies to start their own businesses and without money they can’t buy livestock.

“We are ready to pack up and go back to the war. There we see death coming, here we are watching our children slowly die.”

A young man of twenty named Amos is very helpful as an interpreter. He is raising his little brother, while seeking ways to continue his education. They fled South Sudan on foot, alone and unsure of what lay ahead. Amos left his good school, where he was on his way to a degree and a good paying job.

Sitting with him, he put his head in his hands with agony when he tells us his parents are dead. The two are alone and trying to survive. Amos knows he needs to continue his education and he thirsts for it; but he needs closed toed shoes and books to keep going. He has no money and no job. Like so many there, he is determined to change the momentum of their lives for the better, but he is weary.

Another family walked for three months to get to the camps with their own four kids and two children from a brother. Eight people in one small hut night after night. The father Simon was a mechanic in South Sudan, but there is no need for that in the refugee camp.

Many have trauma so deep they can’t talk about it. Watching the murder of loved ones, gang rape, and witnessing many atrocities that haunt them sleeping or awake. They are losing hope, falling into the trap of despair; and desperately need help addressing their trauma. Suicide is becoming common. Food will ease the stomach pains, but emotional counseling will ease the spirit pain. We have contacts training more people to come help with that. 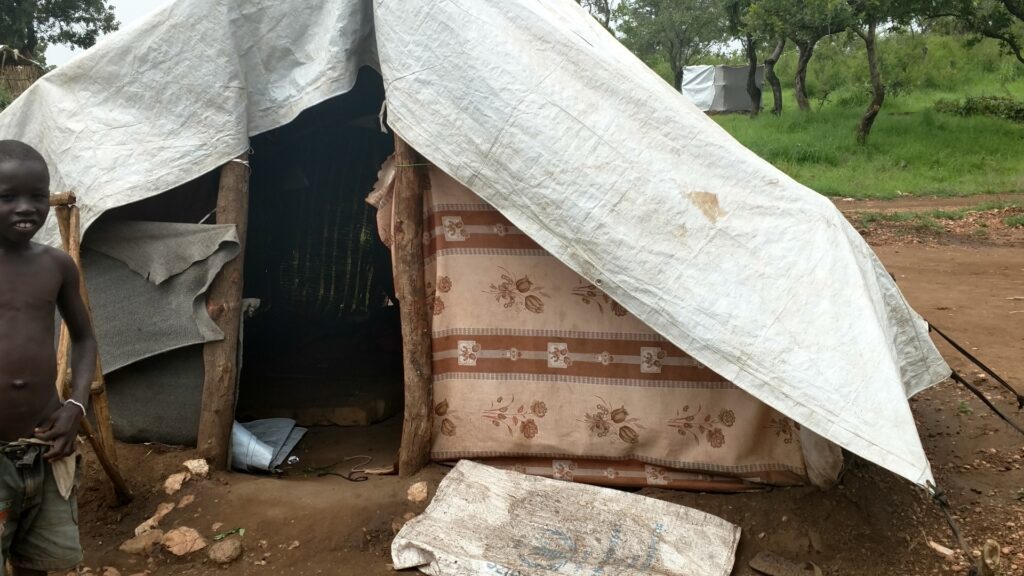 It’s inevitable to feel helpless in these places and to be overwhelmed by the need. It’s by faith that we can walk away and know that the long term projects we are helping to organize will change so many of their lives. We are here to pray for them and to offer assistance as we can; but the biggest thing is empowering refugees to seek that change. To change their despair into determination for a new life.

The transformation that has occurred from those who seek out success and change is powerful.  Pastor James, who was a refugee, started a medical clinic to help other refugees and the Northern Uganda (Koboko) community. He has already saved many lives and is making a living. Alfred and Cosmas, in the Rhino refugee camp, began a school under a tree and now it is growing. They may not make much, but they are changing the future of the youth through education.

Uganda is very opened armed to their “brothers” (refugees from surrounding countries). Because of this, the refugee population in the country has increased from 500,000 to 1.25 million in a year. Of course resources are running out and they can’t help these people without the assistance from other countries and organizations. That’s why we are stepping in to provide a platform; to help rebuild the lives destroyed by a senseless war.

Empowerment isn’t turning your back on the situation; it’s recognizing that we can’t provide everything these people need, but they can provide for their families if we help mobilize them. That’s what the South Sudanese Refugee Project is about: mobilization. We seek to help provide the resources for these wonderful people to make a living and pay for their children’s education.

It will take donations to start, but the end result will be communities thriving on their own. When they go back to South Sudan someday, they will be equipped and motivated to get past their trauma and continue a life of prosperity. Please share this project with your friends and family. Prayer is the most powerful tool and even small donations will go a long way in these camps.