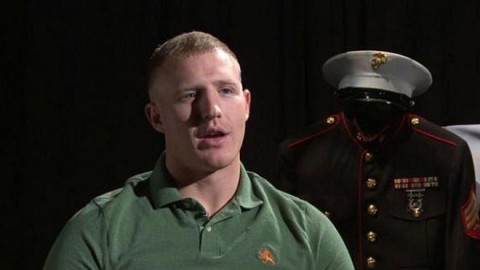 A few days ago, 22 year-old Hannah Luce was in a small plane with four guys flying to a Teen Mania conference. Something went wrong with the plane and they were forced to crash land in Kansas, skidding across a field and hitting some trees.
Three of the men in the plane died on impact. Only Hannah and 27 year-old Austin Anderson, a marine who had done two tours of duty in Iraq, survived. Austin got free, but he could see that Hannah was trapped as the plane caught fire. Somehow he got her out of the plane, exposing himself to the flames in the process.
Austin suffered burns over 90% of his body, but he and Hannah were able to get to a nearby road and get help. Not long after, Austin died from his burns, but he saved Hannah’s life.
This morning, after reading their story, I was scheduled to speak to a group of our long-term missionaries who are here for training. I spoke to them about Austin’s heroism – about how he gave his life so that Hannah could live. And I said, “The world needs heroes like Austin. Around the world, people are trapped in horrible, hopeless situations. They need someone to brave the flames and come rescue them.”
In many ways, our long-termers are doing just that. Roberto Calderon has seen the young women trapped in the sex trade in Cambodia. Justin and Erin Cron feel the call to help the more 90% in Andhra Pradesh who have never heard someone tell them who Jesus is. Others feel called to respond to the poor in Africa.
But as much as something inside us longs to see heroism in ourselves and others, there seems to be a backlash against heroes today. Helping hurting people in Jesus’ name is seen as cultural imperialism. Better to let them alone – talking to them about your reason for hope is presumptuous. We’re happy to be advocates for social justice issues, but few are prepared to go and bring justice. It’s too messy and too costly. And our coffee shops and American ways are too comfortable.
We need more heroes. We need people whose world view is not so filled with paralyzing ambiguity. People who will rush into the fire and rescue those who are caught in a cycle of pain.
I can’t imagine being faced with the choice of giving your life to save another person. But that’s what heroes do. Austin Anderson’s selfless example will continue to speak for years to come. We need more people like him. I think we’re called and can choose to be like him. The question is, will we respond to the call?