What Bono says about our responsibility to the poor

Bono said the following at the presidential prayer breakfast this past
summer:

Thus sayeth the Lord: ‘Bring the
homeless poor into the house, when you see the naked, cover him, then your
light will break 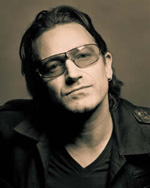 out like the dawn and your recovery will speedily spring
fourth, then your Lord will be your rear guard.’ The jewish scripture says
that. Isaiah 58 again.

That is a powerful incentive:
‘The Lord will watch your back.’ Sounds
like a good deal to me, right now.

A number of years ago, I met a
wise man who changed my life. In
countless ways, large and small, I was always seeking the Lord’s blessing. I was saying, you know, I have a new song,
look after it… I have a family, please
look after them… I have this crazy idea…

And this wise man said: stop.

He said, stop asking God to
bless what you’re doing.

Get involved in what God is
doing—because it’s already blessed.

Well, God, as I said, is with
the poor. That, I believe, is what God
is doing.

And that is what He’s calling us
to do.

I was amazed when I first got to
this country and I learned how much some churchgoers tithe. Up to ten percent of the family budget. Well, how does that compare the federal
budget, the budget for the entire American family? How much of that goes to the poorest people
in the world? Less than one percent.

There is a continent—Africa—being consumed by flames.

I truly believe that when the
history books are written, our age will be remembered for three things: the war on terror, the digital revolution,
and what we did—or did not to—to put the fire out in Africa.