What breaks your heart? This broke mine

Yesterday was Baby Moses’ funeral. Reading my son’s blog about it broke my heart, and I guess, given the world’s pain and how God feels about it, that’s a good thing. If he made us in his image, he continues to mold us using the tool of pain. My son’s blog and that of his teammate, Traci, take you graveside.

From Traci:
My eyes welled with tears as I carried the tiny little coffin toward Pelile’s house. It was around nine and nearly impossible to find her house in the dark. After wandering for a bit, we finally found it. Some go-gos (grandmas) were staying with her, and she and the kids were already asleep. Pelile and Siphiwe woke and sat up when I came in. I knelt and set the coffin down on the mat next to Pelile. I leaned over to give her a hug and kiss on the cheek and she immediately began to cry. Though she does not understand English, I said, “I am so, so sorry,” and began to rub her back. Her pitiful whimper cut through me, and I could barely hold in my own sounds. I sat silently with tears streaming down my face. I don’t know that I’ve ever felt so helpless. When her cries faded, we quietly left. 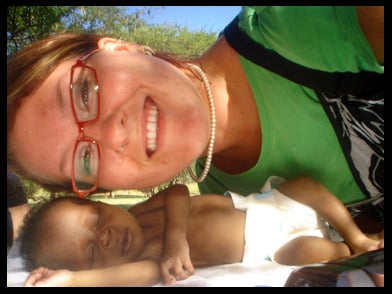 Once we were a few yards from the house I couldn’t hold it in any longer. I let out my sobs and let my body shake with the emotion I had been holding in. I calmed myself down enough to get in the car, but tears flowed easily on the quiet drive home. I wouldn’t wish this feeling upon anyone.

Early the following morning we went to the funeral. Most of the adults from the community were there. The women stayed with Pelile at the home while the men went to the burial site and prepared the plot. In the canopy outside the house we held a short ceremony in which Seth spoke and the women sang some traditional SiSwati songs.

The go-gos brought Pelile and the coffin out, and after one more song, we began the long walk to the cemetery. Pelile sobbed the whole way there, and eventually grew too week to walk further. Seth carried her in his arms for a while, and when she became too heavy, a go-go put her on her back and carried her the rest of the way. The women sang the entire walk.

When we arrived at the site, the women continued to sing while the men finished preparing the plot. At points Siphiwe cried on me or Krystle and it broke my heart even further. Seth spoke briefly again, and then they invited everyone else to share. One or two Swazi’s spoke, then Molly, and me. Knowing my emotional state, I waited as long as I could to stand, but one of the go-gos I worked with pointed me out, and I stood. At first I couldn’t say a thing. I stood there with so many eyes on me while I sobbed. After a few moments, I began to talk about how much the family has impacted me and how grateful we were to share in the life of Moses. I don’t recall everything I said, I just spoke what was on my heart.

These have been the toughest days on the race. Never did I think I would face death on a personal level…and certainly not to this extent.

“God what do you want me to tell these people?”

“Will you give me a scripture to help?”

“Ephesians 6:19,” he said. It reads, “Pray also for me, that whenever I open my mouth, words may be given me so that I will fearlessly make known the mystery of the gospel.” God wanted me to tell them that his will is a mystery to us. 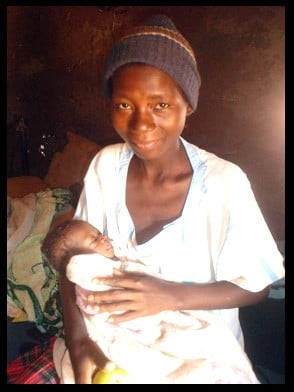 An hour later I stood under a makeshift tent in front of those congregated for the funeral to speak about the infant. The mother, Pelile, sat in the dark house whimpering with the mourners. I told them God was watching them now and mourning with them. He loves them and knows their pain…

Pelile has tuberculosis and AIDS. She walked frailly, bracing herself between two women. We stopped to look at the coffin and cry periodically. Eventually Pelile stopped completely, physically unable to continue. I asked if it were acceptable to carry her on. She dropped into my arms as I bent to pick her up. She put her head on my chest and whimpered gently, almost as if she didn’t have the strength to cry. The mourners continued singing.

It wasn’t long before I couldn’t carry her anymore. There were no more men, so one of the women put Pelile on her back and we continued walking. They asked me to say something more so I told them about the stories being read about this baby around the world. I told them people like you would do something to help them. Don’t let me down.

We humans have an incredible need for redemption. It’s hard-wired in us. It’s what leads us out of our own broken state and into the arms of God. Maybe this has happened so those of us sitting in our easy chairs can practice compassion today. I don’t know. This tragedy happens so frequently on the other side of the world. Children like Moses don’t have to die like this. My prayer is that in his death, Moses will bring life to other orphans like himself.
Click here to give a gift in memory of Moses, and choose “Nsoko Project” from the drop down menu.

And if you’re a 20-something who wants to give more than money – consider stepping into the offering plate with all you are as it passes around. Click here to see if you have what it takes to be part of a generation that will rescue other children like Moses before it’s too late.