What difference can $1 make? 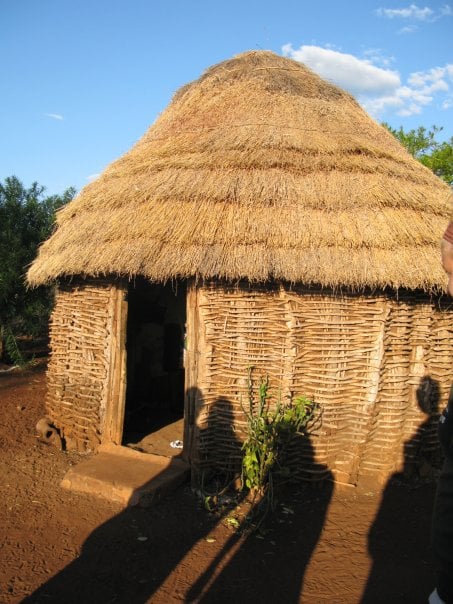 Well… I thought about it a lot. Prayed about it a lot. And was really
struggling. I wanted to buy something that would last– kind of like “
a gift that gives back” concept. After brainstorming with my teammate
Ryan, the decision was clear: we would buy candles.

Candles were
perfect for several reasons. First, upon buying them alone we helped
the community by supporting the local store. Secondly, they provided
light. Third, and most importantly, they represented a much bigger idea.

The
next tough decision was choosing who we would give the candles to.

When we first met Khukwane
one a home visit, he was sitting against his hut. He was frail man,
with old remains of food beside him, and as we asked “how are you” he
replied with, “I’m dying.”
He told us he had no mats for us to sit on.
Of course we told him that didn’t matter and plopped right down in the
dirt beside him. As we sat there, we learned that Khukhwane had no
family, no friends, and an injured leg.
He sat against his hut from
sunrise to sunset except when he would beg for food from his neighbors.
He had nothing. He was lonely and hopeless. We asked him if he know
anything about Jesus or Heaven. He told us he didn’t know much, but
he’d like to hear.
We sat with Khukhwane for almost twenty minutes
explaining God’s grace, the power of the cross, and a place where he
would no longer be hungry or lonely or in pain. As we presented the
Gospel to him, we would ask if he was understanding, then he would say,
“Yes, I have been listening attentively to all you have said.” Finally,
we explained that with a simple prayer of faith, he could have eternal
life.
He was hesitant though, because he told us he had a speech
impediment. Immediately we told him that it doesn’t matter! God knows
your heart. Relief flooded his face, and in that moment, he bowed his
head, and accepted Christ. Seth, I have NEVER in my life seen such a
beautiful transformation. Khukwane was dying from the inside out when
we first met him, but when we left–he literally had a smile on his
face.
Before we walked off, we invited him to our giant cow roast the
next week. He said he’d love to come, but he had no coins to ride the
bus. We gave him 5 rand, and he excitedly said “I will be there without
fail!” Of course we were hopeful, but not completely confident
considering he had NO money and he would have to save this 5 rand for 6
days. But sure enough….the day of the cow roast, who comes stumbling
in with his homemade cane? KHUKWANE!

We greeted him with the biggest
smiles on our faces, promptly gave him a chair to sit on and Kyra let
the children in songs to entertain him. He gave him a big plate of
food, and Gift even came over and chatted with him. When it was time
for us to take him back to his hut in the kombi, I jumped in and
presented the candle on the way. I told him to remember the light of
his life when we saw the candle–Jesus. And to remember that no matter
how lonely or sad he may get, there is a hope, there is a better life,
and as the candle burns remember that and remember that you are not
alone–we are praying for you! He smiled yet again, and as I hugged him
bye when we dropped him off, I couldn’t help but smile the biggest
smile. God is so good.
So thank you, Seth. For the $1 that truly impacted my summer more than I can explain in words.
I leave you with a challenge: You were born to be a difference-maker. Give someone a small gift of money like this and ask them to report back to you about how they invested it to bring light in a dark place. Then let us know the difference it made.