What happened to Christianity? 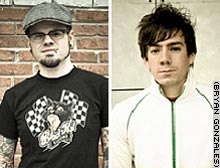 Editor’s note: Jay Bakker, son of former Praise The Lord leaders Jim Bakker and Tammy Faye Messner, is minister of Revolution Church and subject of a new documentary series, “One Punk Under God,” on Sundance Channel. Marc Brown is a Revolution staff member.

NEW YORK (CNN) — Where did we go wrong? How was Christianity co-opted by a political party? Why are Christians supporting laws that force others to live by their standards? The answers to these questions are integral to the survival of Christianity.

While the current state of Christianity might seem normal and business-as-usual to some, most see through the judgment and hypocrisy that has permeated the church for so long. People witness this and say to themselves, “Why would I want to be a part of that?” They are turned off by Christians and eventually, to Christianity altogether. We can’t even count the number of times someone has given us a weird stare or completely brushed us off when they discover we work for a church.

So when did the focus of Christianity shift from the unconditional love and acceptance preached by Christ to the hate and condemnation spewed forth by certain groups today? Some say it was during the rise of Conservative Christianity in the early 1980s with political action groups like the Moral Majority. Others say it goes way back to the 300s, when Rome’s Christian Emperor Constantine initiated a set of laws limiting the rights of Roman non-Christians. Regardless of the origin, one thing is crystal clear: It’s not what Jesus stood for.

His parables and lessons were focused on love and forgiveness, a message of “come as you are, not as you should be.” The bulk of his time was spent preaching about helping the poor and those who are unable to help themselves. At the very least, Christians should be counted on to lend a helping hand to the poor and others in need.

This brings us to the big issues of American Christianity: Abortion and gay marriage. These two highly debatable topics will not be going away anytime soon. Obviously, the discussion centers around whether they are right or wrong, but is the screaming really necessary? After years of witnessing the dark side of religion, Marc and I think not.

Christians should be able to look past their differences and agree to disagree. This allows people to discuss issues with respect for one another. Christians are called to love others just as they are, without an agenda. Only then will Christianity see a return to its roots: Loving God with all of your heart and loving your neighbor as yourself.

The Apostle Paul describes this idea of love beautifully in 1 Corinthians 13:4-7: “Love is patient and kind. Love is not jealous or boastful or proud or rude. It does not demand its own way. It is not irritable, and it keeps no record of being wronged. It does not rejoice about injustice but rejoices whenever the truth wins out. Love never gives up, never loses faith, is always hopeful, and endures through every circumstance.”

But don’t take our word for it; look at what Jesus and his followers stood for in his time and what Christianity stands for today. Then come to your own conclusion.