What it’s like to die of AIDS – Jane’s story

Kari Miller is a friend who has developed a deep sense of community with a group of widows in Uganda. One of her best friends from that group, a widow named Jane, has battled AIDS. She has been brave right up to the end. Kari tells her story here. Last Wednesday night, I got a call from widow …
By Seth Barnes
18 November 2009, 12:11 am
By Seth Barnes
18 November 2009, 12:11 am

Kari Miller is a friend who has developed a deep sense of community with a group of widows in Uganda. One of her best friends from that group, a widow named Jane, has battled AIDS. She has been brave right up to the end. Kari tells her story here. 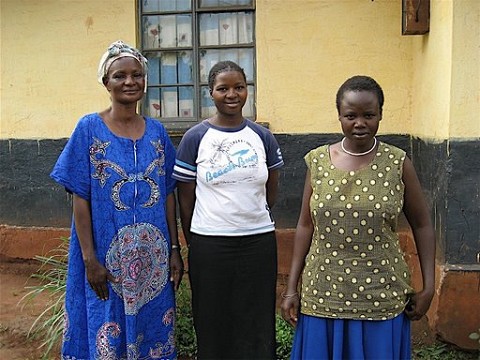 Last Wednesday night, I got a call from widow Joyce. Her voice sounded weary. She told me that Jane, my dear sweet widow friend, was “badly off.” She encouraged me to come and see her the next day, as she was sure God could take her home at any moment.

As we entered her house, we found Ida, another one of our widows, praying with Jane’s Aunty and caregiver. Her Aunty was leaning against the doorframe, shoulders hunched over sobbing on Ida’s shoulder. Ida was praying softly while rubbing her back.
The three of us kneeled in front of Jane’s bed as the Aunty continued to sob. She then walked towards Jane’s bed and pulled the covers off of Jane’s body and choked out the words, “You want to see Jane. This is Jane. This is not how things are supposed to be. She vomits and has diarrhea all day long! She is in constant pain! This is not a life!” We looked at the deformed body in front of us. She was naked except for a homemade diaper. The skin was tightly clinging to each rib-each indentation between the ribs was deep enough to fit the width of your finger. As the ribs ended, there was no stomach…it was as if the skin fell directly to her spine and then stretched over her pelvic bone. She was now just a skeleton…a collection of bones. I couldn’t help but breathe in sharply when I saw the grotesque shape of her body. I remembered seeing films of Holocaust victims in school and now I was seeing the same horror right before my eyes. I blinked back tears and tried to compose myself.

Ida took the Aunty outside to comfort her as I leaned towards Jane’s face and greeted her…very softly, tenderly I said, “Jane…Do you remember who I am?”
Very weakly, she turned her eyes toward me and said, “Aunt Kari.”
“Yes, that’s right. I wanted to come and tell you that I love you and that God loves you very much. How are you feeling today?” I asked.
“I don’t know…breathing is hard, but God is with me. He is here with me.” At that point, she had the most peaceful look on her face…even amidst all the pain, all the diarrhea, all the vomiting…God was there…seated next to her, holding her. It was then that I thought AIDS will destroy the body, but never, never the soul. She was becoming tired so I asked if I could pray for her. I wasn’t sure if I could hold it together long enough to pray for her, but suddenly I felt a courage and strength I didn’t even know I had. I asked God to continue to sit with her, to hold her, to comfort her. I asked him to lead her home…to release her from her suffering. As I prayed, I sensed that God was getting ready to lead her home…that she would be leaving us soon.

Then in the afternoon, Kathy, Jane’s oldest, came home from boarding school. She had finished her exams early and was excited to come home and see her mother. When she called Jane’s name, she didn’t move. So Kathy began hysterically screaming and crying.
At that point we knew we needed to go check on the children. Annet and I rushed to Jane’s home. It was now dark and there was no power in the quarters. The night was inky black and it was difficult to see your hand in front of your face. As we approached the house, we heard Kathy crying and wailing. I began to shake. I wondered if Jane had already died and now we would see her dead body in the dark. Annet quickly threw her arms around Kathy and held her while Kathy cried on her shoulder. Annet then said, “We won’t leave you. We will stand with you until the end. We won’t leave you.” I softly rubbed her back and assured her that we would stay with her.
We entered the home each holding one of Kathy’s hands and approached Jane. At that moment Jane opened her eyes and I could see she was still breathing. I kneeled down and told Jane that we had come to visit her again. She wasn’t sure who I was, but she said that God was there with her. She even asked Rebecca if she was dead. We then softly told her that she was still alive, but that if she wanted to follow Jesus it was okay. It was then that Annet and I noticed a shadow towards the back of the room. I have great difficulty seeing in the dark, so I asked Annet, “Can you see who that is?” She noticed right away that it was Bernard, Jane’s second oldest son. I went over and hugged him. He seemed scared to get close to his mother and yet at the same time he seemed to want to be near her.

The children had not eaten at all, so I called widow Ruth and asked her to bring some food for the children to eat. As Ruth set out the food, Jane suddenly became full of energy and began to talk. She asked each of her children to come sit next to her and then showed her love for them. She pleaded with Kathy to keep studying well and to be the woman God had created her to be. Then she smiled at her daughter. She continued to tell them that God was here with her and that she was okay. It was then that I realized that she was saying goodbye.

Joyce stayed up all night with Jane…talking with her, remembering the laughter and the sorrows they had shared over the years. Joyce did most of the talking, but it felt good to be with her one last time. At 2:00 am Joyce bathed her friend one last time, she didn’t want her to die with vomit or diarrhea on her. Finally at 3:45 in the morning she breathed her last breath and followed Jesus to the House of the Lord.

I heard the news of her death at 5:00am and couldn’t go back to sleep. I laid in bed thinking about all the special times we had spent together, the times we had wasted whole afternoons laughing and trading stories. I felt a deep sadness enter my soul, not despair, but just a sadness in losing someone you love…knowing it will be a long time until you see them again. But, strangely enough, I also felt a strong sense of peace in knowing that she wasn’t suffering anymore…that she was not in pain and never would be again.

On Sunday, I went to Jane’s house to comfort the children and to support her grieving family. As I arrived, her Aunty grabbed my hand and led me into the house where Jane’s body lay.
I dropped to my knees beside her body and began to cry…really cry. She was wearing the Dorcas Widows Gomasi (dress). The dress was brand-new…never been worn. Now, she was wearing that beautiful dress to go meet the savior. She was representing the widows in the courts of heaven. She looked so beautiful. Her face was so peaceful. It was then I realized that it was the first time I had seen her face without the mark of pain.

So now my dear sweet friend is in the arms of the savior…laughing, loving and free…free of pain, free of suffering, free of AIDS…just free. She is dancing in her beautiful dress and praising the God who rescued her from her body of death. Oh, how sweet it will be to join you in that party someday….

“Surely goodness and love will follow me all the days of my life, and I will dwell in the house of the Lord forever.” Psalms 23:6