I heard the testimony of a big and gruff, man about his mission trip.“It was to Reynosa, Mexico. We didn’t do too much building or construction; we did do Vacation Bible School.  Something happened there one day that broke my heart.  Every day there was a lady who came to …
By Seth Barnes
01 September 2014, 12:09 am
By Seth Barnes
01 September 2014, 12:09 am 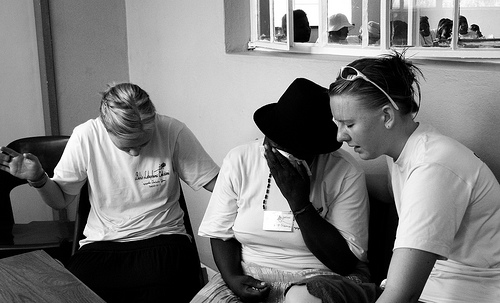 I heard the testimony of a big and gruff, man about his mission trip.

“It was to Reynosa, Mexico. We didn’t do too much building or construction; we did do Vacation Bible School.  Something happened there one day that broke my heart.

Every day there was a lady who came to the VBS who didn’t have any legs.  She didn’t have a wheelchair.  One of her arms was bent from years of pressure, scooting herself along on the ground.

Even when it rained and streets were muddy and filled with water, she’d scoot through the mud.  What was really hard to watch is that she had a small child that she wanted to make sure got to VBS.

At that point as the man related the story, he broke down in tears and couldn’t go on.  Finally he pulled himself together enough to say, “I’ll never be the same again.”

Short-term missions trips can do that. A moment can change the course of your life. And we would do well to analyze why. Why will the man never be the same again?

The point is that the man changed for the better while on his trip. We don’t do short-term missions for the missiological impact. We do them because Jesus modeled them and they serve as life-changing tools for those who are serious about discipleship.

Short-term missions have come in for a lot of well-deserved criticism. Done poorly, they foster dependency, waste money, and can even hurt people.

But done well, they can change lives and follow a biblical pattern.

Did you go on a mission trip this past summer? Did it change any lives? How do we know? What price do we put on that change?