Whimsy vs. the dreadful tick

From my son Seth’s blog:My mom thought he was getting old. “He’s not getting old, Karen,” my dad responded.”Yeah,” I chimed in. “This is not an ‘old’ problem.”We all looked at our dog Whimsy as he staggered and limped around in front of us. Just the day before there was nothing out of the ordinar…
By Seth Barnes
14 October 2007, 12:10 am
By Seth Barnes
14 October 2007, 12:10 am

From my son Seth’s blog:

My mom thought he was getting old. “He’s not getting old, Karen,” my dad responded.
“Yeah,” I chimed in. “This is not an ‘old’ problem.”

We all looked at our dog Whimsy as he staggered and limped around in front of us. Just the day before there was nothing out of the ordinary from our wonderful black maltepoo (maltese, poodle mix). He howled with my dad, laid on people’s feet, and ran around chasing the thrown toy. What’s a dog to do when the next day his hind legs go limp? 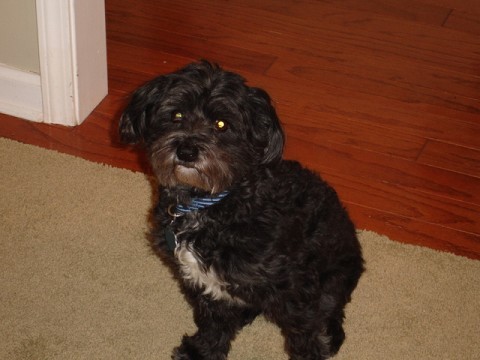 About three hours later as I was brushing my teeth, I heard my dad say “blah blah blah trouble,” because the brushing was so loud to my ears.
“Wha…?” I said looking at the ceiling.
“blah blah Whimsy – blah trouble.”

I stepped outside the bathroom and looked down the hall at my dad holding Whimsy in his arms. He set the dog down in front of him. Whimsy wobbled and widened his stance, staring at the ground. Not good.

The next thing I know the whole family was all huddled around Whimsy with our hands on the dog, praying for healing. No matter how ridiculous the circumstance, prayer is the solution in the Barnes household. (My sister, Emily, prays that she would win card games.) We prayed and then called the vet.

“Dang!” I said. “Look at that fat tick on his ear.” This tick was fat, but there was one fatter than she, and on the same ear.

My mom told us to leave them on, and so we did. I thought this a ridiculous notion, but perhaps she knew something I didn’t. She came back a minute later. “The vet says she thinks Whimsy’s got tick paralysis,” she said. “The big ones are the females, and they’re the real trouble. If we take them off, the vet says he’ll be a hundred percent by the morning.”

My dad handed me the dog and started plucking. Two down and one popped. I shuttered and gagged. The nastiness ensued. Three more. I set Whimsy down as Estie snuck a thorough, but necessary, glance up the hind end. Apparently ticks like to get up there and inside the ear. Ticks are horrible creatures.

The next morning Whimsy was not 100%, but he was about 75%, and getting better. Tick fever was in fact the problem. By nightfall, he was as good as new!
For another Whimsy blog, go here.