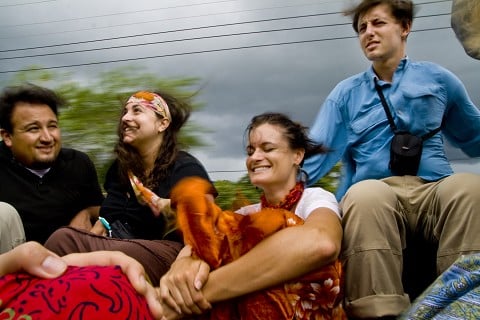 Misha just walked into my room. She’s been on the WR and is here for CGA now. She didn’t beat around the bush, “Why do we have the World Race?” She asked.
I began to speak. I hadn’t even started to wax eloquent yet and she pulled out her phone and said, “mind if I record this?” What I said next is something I’ve shared hundreds of times. But because “vision leaks,” I keep doing it. So here are three reasons why we do the World Race.
1. It’s God’s Dream
He gave this to us. He specifically gave it to me and a few others as an idea to steward in partnership with others. It was never mine. And from the outset, I knew that it would reach thousands
We all need to be discipled and Jesus used the context of a journey to do his discipling. A journey takes you out of your comfort zone, away from the things that are familiar, and it gives you the opportunity to depend on God in new ways.
The WR takes you to new countries where you have to navigate strange cultures, develop new relationships, and learn new ways of living that render your comfort zone irrelevant.

A new culture will do that to you. Suffer from arachnophobia? Then you’ll love Cambodia where they eat large spiders. Or travel to Peru and you might find yourself gagging when they serve you chicha, a drink made from chewed up yucca. Don’t like snakes? Then you’ll want to steer clear of the jungles of Papua New Guinea.

2. It’s God’s Pattern
Second, God has always trained those he called to represent him through a journey away from home. He sent Adam out from the garden, Noah out from dry land, Abraham out from Ur, Isaac out from Beer Lahai Roi and Jesus himself on a three year journey where he had “no place to lay his head.”
It’s remarkable how, to give people stories, God sends them on a journey.  On a journey the story acquires new settings, characters and plot twists. We develop new neural pathways on a journey.
We need journeys to be called into new levels of dependency on God and new levels of intimacy as he comes through for you. God allows the privilege of abandoning the things that have caused us to grow into a false identity (a false self) and then shows us who he made us to really be.
3. We Need Discipleship
Third, our lives are so crammed full of noise and stuff these days. We parents coddle our young people. We want them to “have it better than we did,” so we deprive them of the gift of failure or even the consequences of their actions. So they grow up unfamiliar with failure and therefore afraid of it.
Our children deserve better. We teach them about Jesus, but will we ever trust them to Jesus? Will we ever give them the chance to be discipled as Jesus would like to disciple them?
Young men especially are not shown how to walk in responsibility. Instead they have this protracted adolescence. Young people are bored and cynical. They desperately need a rite of initiation that says, “Here is what it means to walk as a man or a woman in the kingdom of God.”
The World Race, at its best, is a rite of initiation. It says, “Yes, you’ve been weaned to seek first your own comfort, but here’s what it looks like to seek first the kingdom.” It says, “You may have thought that the latest X-box was a thrill, but consider seeing the world from God’s perspective and joining with him in setting it free.”
The World Race isn’t just a good idea, it’s an experience that opens your spiritual eyes and imagination. It’s a re-set of what you thought was normal. It shows you that the church isn’t the boring box your parents put God in, it’s actually about community that brings you life and excitement. It shows you that you were made for more than a Groundhog Day existence.
After ten years, I’m still passionate about this stuff. I still believe that we’ve just scratched around the edges of this thing – that it has so much more potential than we’ve realized so far.
It’s a gift that God doesn’t just want to reserve for a privileged few Americans, but wants us to share with the world.