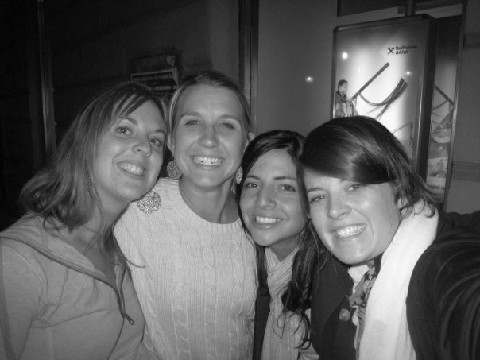 People hear “the race” – and they immediately know what it is and what to expect.  my roommate today basically said something along those lines.  she was talking about how we had less than a week to make plans – but that should be fine with me because of my experience on the race.  i started dying laughing.  she thought i was offended and started back-peddling – saying that i was more flexible than she would ever be because of my year.  i wasn’t offended at all – but she was right on!  she knows very little of the actual experience, but she knows it enough to realize what to expect …. crazy accommodations, packed 30 hour bus rides, the same clothes day in and day out, bucket showers if you’re lucky, crazy community living and this unbelievable sense of adventure that is mandatory if you’re going to survive.

i believe the culture that has developed is strong and positive in many aspects.  the intimacy that the WR cultivates is astounding.  granted, it’s welcomed by some and forced upon others – but that’s ok – either works.  ha!  in the end, it’s something that most of us have never experienced in our lives.  real, true, honest, refreshing intimacy.  something happens along the way – for some it’s at training camp and they’re immediately an open book – others, like myself, take awhile … either way, it’s so good to finally be at a place of acceptance.  it doesn’t happen hardly ever in our normal lives – even in the context of our spiritual lives within church or so called “community” groups.

this is something i didn’t really understand until AFTER the race.  i didn’t realize it, but my team and the race family had become over the course of the year deeply connected to me.  it was a depth of intimacy that i hadn’t ever known.  and i think it’s what Christ calls us to as the Body.  we’re way too cut off in our world today from one another.  for the first time – i really saw and felt and understood what it meant to be the Family of God.  we would sing about it in church when i was little, but it was always a vague concept that was floating out there.  but now – i can honestly look at these Racers, whether on my squad or the new friends i just met in Romania and call them “brother” or “sister.”   the depth of that concept is new to me and i never would have known it without the race.  something about the shared experience allows me to email Sara Choe and arrange a time for us to get together to meet since she is moving to the DC area.  or for me to meet all of the other alumni like Matt and Andi and Caroline and Gretchen, etc. in Romania and immediately have a base to start from.  the strong culture and experience help develop that intimacy even among alumni and people who wouldn’t otherwise know each other.  it’s really cool to see.

and yes – i would probably share my toothbrush with them too. ha – talk about CULTURE!!!    you should just start polling racers – during their application process and then at final debrief  ……  “would you ever, if asked, share your toothbrush with another person?”   and “on a scale of 1-10, how weird is that concept to you right now?”   ha.  it would be interesting to see the answers …. and just how NORMAL that would seem to many by the end of their year.   🙂

only downside to culture?  the expectations that come along with it.  that was probably my biggest trip up on the race …. i wanted to have my own experience, not the experience someone else told me i was going to have (or needed to have).  that’s a tricky one.  because ultimately, you’ve got 50 plus people walking different journeys.  every single one will have a different experience.  i think as long as we encourage a “culture of expectation” vs. a “culture of expectations” we should be good.  expecting the lord to work and move – lots of times it will probably be the same way in many people, but never quite knowing what to expect!!!  ha.

my hopes for WR culture?   i think that’s what i started thinking about the most.  more than “those crazy people who lived out of a backpack for a year” – what do i want the WR to be known for?????     that we treat others and each other well.  that we desire to serve.  that we love and treat our contacts well.  that we are life-giving and speaking.  that we know who we are.  that we are fearless.  and bold.  because we really believe this crazy idea about the kingdom here and now.  that we walk this thing out past 11 months.   that it’s not about an experience – but about a life-well lived after that experience.  those are just a few to start.  my hopes at least.  for the culture and the movement and the generation.

anyway – i’d be curious what you see in the culture – is it all rainbows and good things?