We fly to Romania today to debrief stories like this one. This blog post by Rachel Allen really got to me. She met an old leper woman in Nepal who wanted to give her life to Jesus, but couldn’t because if she did, there would be no one to take care of her.   And inside I’m saying, “Wh…
By Seth Barnes
27 February 2011, 12:02 am
By Seth Barnes
27 February 2011, 12:02 am 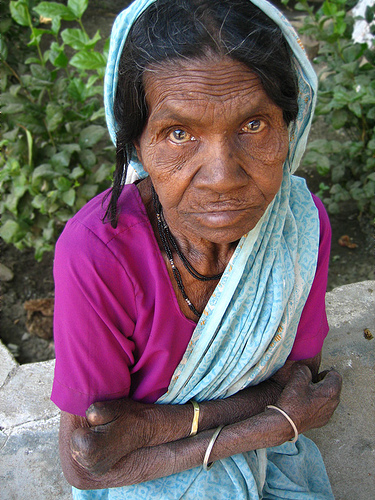 We fly to Romania today to debrief stories like this one. This blog post by Rachel Allen really got to me. She met an old leper woman in Nepal who wanted to give her life to Jesus, but couldn’t because if she did, there would be no one to take care of her.
And inside I’m saying, “What?!”
Yet another story to add to my list of things that are “Not OK.” It started with Kristen’s post about Sarah. And the darned list keeps growing.
Read it and answer two questions:
1. What does your “Not OK” list look like?
2. What are we to do?
I think we actually have the power to make a difference in Teelkamali’s life. Something must be done. If not you and me, then who? Here’s the story:

After passing a leprosy colony our
teams decided to stop and pray over the people. This was one of the toughest
experiences of my life. I’m still trying to process questions and feelings but
I wanted to share with you some of my raw thoughts.
After walking in I realized this
leprosy colony was a lot like the two I’d been to in India. I looked around and
saw the woman I felt like I should go to. Natalie was already sitting with her
but I just had a feeling I was supposed to go pray for her. We prayed for her,
maybe you’re wondering what we could pray for at a leprosy colony. Generally
I’ll pray for healing, for relief from pain and suffering, and for salvation,
because that’s the long-term healing and relief from pain and suffering.
We sat there and just listened to her talk, but could not understand
a word she was saying. Each word that came out came with tears in her eyes as
she pointed to where her feet and shins used to be, or where her fingers once
were. She pointed to her eyes and arms and legs and every inch of her body. It
was literally killing me not knowing what she was saying. Our translator was
about 30 feet away translating a short sermon to some of the lepers that could
still walk, so I could not use him for the moment.
Natalie left and I just sat with the women, one of my hands on her bandaged knee,
and the other on her shriveled hand. She continued to talk and I just sat there
praying silently. I asked God for a way to communicate with her, I kept asking
him over and over to relieve her pain. Then I felt like I was to go to another
woman. Soon after, Prabin, our translator came over and started to help
translate. I was able to talk to 2 women and Prabin asked if there was any one
else I wanted to talk to. My prayer was answered! Immediately I dragged him
over to who I would soon learn was Teelkamali. After about a 25-minute
conversation of us going back and forth I learned her story.
I know God loves these people, but
when a 90 year-old woman, with tears welling up in her eyes, looks at me and
says “I want to believe in your God, I know about Jesus, I’ve heard of his
healing stories, but why won’t he heal me? Why am I in so much pain? Why can I
barely see? Why don’t I have legs anymore, or fingers? I just want to die now.
It won’t be long because the doctors say it’s pointless to take my medicine
anymore so I’ve stopped taking it.”
I had no answer for her. I know God
loves her, and I know she’s so beautiful in his eyes, and I know he wants her,
but what do you say to that? We tried to tell her that in heaven, there will be
no pain, no sorrow, no weeping, no hurting, it will just be joyous. But the
thing is, if you don’t accept Jesus’ love in your life now that will mean
nothing. Plus, she’s had a lifetime of pain and sorrow, she doesn’t know what
joy is, she’s basically spent 60-70 years behind the same walls.
She said if
she started to believe in Jesus that no one would continue to care for her. No
one would take her to the bathroom anymore. No one would even feed her. I know
this is only the physical world and her time is almost over, but she has
suffered enough.
She kept telling us “if a Christian will come take care of me
and do all these things for me, I will give my life to the Lord.” This was not
possible for us obviously. And after much dialogue we left with nothing
changed. I felt defeated that I could not help her, that her heart was still
hardened towards God.
I struggled for many days. I
had/still have many questions about suffering.

Thank you, Rachel, for struggling. We need to allow the Teelkamalis of the world to get inside our heart where Jesus lives so he can comfort them. Jesus said, “Why do you call me Lord, Lord and don’t do what I say?” A good place to start making him Lord is with the widows and orphans like Teelkamali whose situation he is not OK with. I encourage you to start a Not OK List* today. And then, become the answer to the questions it provokes.
*Some other things on my list here and here and here. God is saying “Who will go for us?” (Isaiah 6:8) It’s a good question.