You can be a hero

When was the last time you felt heroic? And what does it mean to be a hero anyway? I don’t think it’s trite to say that Jesus was the ultimate hero. I love the way the Over the Rhine lyric puts it: Here and there I see my savior’s face He’s still my favorite loser Falling for the entire …
By Seth Barnes
29 October 2009, 12:10 am
By Seth Barnes
29 October 2009, 12:10 am 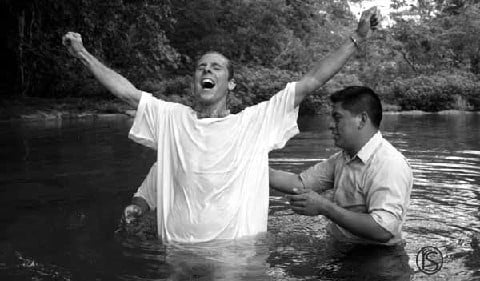 When was the last time you felt heroic? And what does it mean to be a hero anyway? I don’t think it’s trite to say that Jesus was the ultimate hero. I love the way the Over the Rhine lyric puts it:

In losing, he won. That’s the essence of heroism: sacrificing for someone else who is in peril. It’s something we long to do, but rarely are able to pull off. When I was a missionary in
Indonesia, I discovered David Bowie’s song “Heroes” (see video below).
I loved the evocative way Bowie described the primal yearning in all of
us to transcend our mundane reality. The song, obscure at the time, itself became representative of the heroic cycle, 23 years later coming out of nowhere to be named #46 on the Rolling Stone list of The 500 Greatest Songs of All Time.
You can tell a lot about a person by their heroes – the people they look up to as models; the people they think about and read about. Is it a sports hero? A celebrity? A mentor?  Recently my friend Bubba Fortner blogged about the three stages that a hero goes through: Departure, Initiation, and Return.
The story of Odysseus stands as an archetype of the heroic life. Typically the hero’s life is framed as a journey. Joseph Campbell describes it in his book The Hero with a Thousand Faces.
“Once upon a time, in a far-off land, lived a hero who was prosperous, happy, and respected by all.  One day, three visitors arrived.  They began pointing out the hero’s many flaws and told him he was unfit to remain.  The hero resisted, but to no avail.  He was ousted from his land and sent off to a few he met during his exile, he transformed himself and vowed to make his way back.  And eventually he did return, where he was welcomed to a place he scarcely recognized, but that he still understood was home.”
This could be you. You could be a hero if you could find people in peril and sacrifice for them. And you could be a hero if you gave yourself to God’s dream. It will cost you and you’ll feel like you failed along the way. But your story could be a hero’s story. If there are heroic elements to my life, it’s because I’ve given myself to God’s dream for the poor and the oppressed, at times being willing to put all my chips on it. Here’s how my story is unfolding so far:

[THE DEPARTURE]  After graduating from college, I spent nine successful years preparing for a career in ministry. But it came to a sudden and confusing end when I was asked to leave an enterprise I’d helped start. I was discouraged and ready to give up on the prospect of a ministry career. But in the midst of this, God spoke to me and told me to “not grow weary in well-doing.”

[THE INITIATION]  I had a young family with five children under the age of seven. It was in the midst of this personal crisis that I started Adventures In Missions. A couple of years later, through further crisis, I gradually I began to learn to hear the Lord’s voice and follow his direction. As our children grew, I learned more about the process of discipling them. AIM grew and I grew in my desire to see young people walk as Jesus walked.

[THE RETURN]  In 1994, we sold our home in Florida and moved to Georgia. AIM began to grow at a rapid rate, discipling young people around the world. A decade later we began to work intensively in Africa. Inspired by Andrew Shearman, I began to explore the theme of kingdom and how to help people understand its reality. As our children have grown and left our home, Karen and I have begun devoting ourselves to discipling a generation as Jesus did. We’re committed to seeing Jesus’ goal of taking his gospel to the nations realized.
So, that’s me. Where is your life headed – what path are you on? Is there something bigger than you you’re making sacrifices for? Many of you are in the middle of your own heroic story. Don’t give up – the best is yet to come. Recognize that you have to go through a phase of death and commitment to a cause much larger than yourself before you get there. What stage do you find yourself in? Where do you see your life going?