In the village of Bajikaln, Lukas, a believer from a nearby village, began sharing the Gospel on a visit. Within months, nearly 40 people showed up to hear more. Rooms became full and many were sitting outside. A woman named Eramma was bedridden with typhoid fever. Lukas prayed for h…
By Seth Barnes
03 November 2019, 12:11 am
By Seth Barnes
03 November 2019, 12:11 am 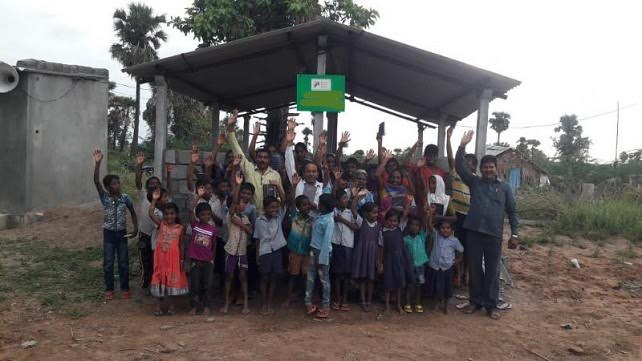 In the village of Bajikaln, Lukas, a believer from a nearby village, began sharing the Gospel on a visit. Within months, nearly 40 people showed up to hear more. Rooms became full and many were sitting outside.

A woman named Eramma was bedridden with typhoid fever. Lukas prayed for her. Everyone was amazed when she was healed and gave her life to Christ. Their many gods didn’t have power like that.

If the church in America is struggling, all you have to do is go to Asia to see God on the move. Because of a government crackdown on religious freedom, you’d think that the church would struggle, but the opposite has happened.
Ten years ago, a majority of the villages in the state of A.Pradesh didn’t even have a church. But thanks to ministries like Project Saturation, that is changing.
Project Saturation has the vision that every village deserves at least one church. The first 7,000 churches got planted relatively fast. For the last ten years, as Project Saturation and AIM have partnered, the focus has been on sustainability.
The only way to help a missional community that starts in someone’s house get to a place of sustainability in a village that is unreached is by going deep through discipleship. As AIM and Project Saturation have partnered this past decade, that has happened. Believers have grown in their faith and house churches have grown into what are called “community churches” – churches that are larger and more sustainable.
Community churches form when the house church is able to build a small shelter and begin meeting there. This is an important sustainability threshold as neighbors see the church differently. Persecution drops and historically, churches begin to grow at a much faster rate when they have a building where they can meet.
The fruit of the emphasis on discipleship has been believers who understand what they believe and are prepared to go and plant similar churches elsewhere. In 2017, AIM and Project Saturation combined to train church leaders in the 2 Timothy 2:2 principle where Paul asks Timothy to teach reliable people who will then train others. And early this year, Project Saturation felt God calling them to send out these disciples to plant churches.
What happened next was epic – the word went out to existing churches to mobilize volunteers to go to neighboring villages. The result? Nearly 4,000 disciples were sent as national missionaries with the mandate to plant three churches each.
In less than a year they have seen an explosion that looks like the book of Acts! Nearly 8,000 total churches have been planted so far.
The goal is to have a church planted in every village in the state of A.Pradesh – 25,000 by the end of 2020.
Most of these villages have never had a church planted in them. We believe that we are part of the greatest harvest in the history of man. The best is yet to come!*
* If you’re interested in finding out more or getting involved, go here.

Jesus’ last words to his disciples were to give them a mission.   “Go and make disciples o…
06 July 2019

5 Steps to Becoming a Missionary

Austin Wesson and Rebekah Bouma met as young missionaries. Tragically, they got married and die…