A Story of Finding True Love

Hiking the Camino in northern Spain, you hear some fascinating stories – stories of love lost and found, and of people giving up on love and finding it. Occasionally you get to see one unfolding before you. Last summer, while hiking the Camino, I met Enrico, a tall, distinguished Italian, and …
By Seth Barnes
09 January 2014, 12:01 am
By Seth Barnes
09 January 2014, 12:01 am 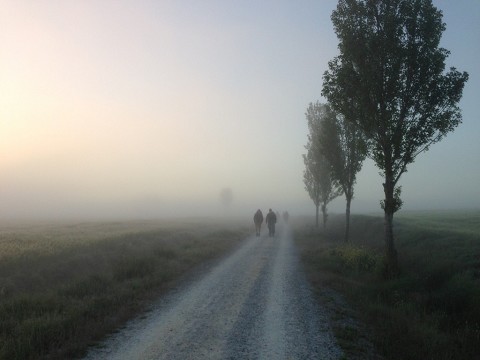 Hiking the Camino in northern Spain, you hear some fascinating stories – stories of love lost and found, and of people giving up on love and finding it. Occasionally you get to see one unfolding before you.

Last summer, while hiking the Camino, I met Enrico, a tall, distinguished Italian, and saw his story as it unfolded.

After Enrico’s wife died from cancer, he was beyond despondent. He knew there would never be another one like her.

We’ve seen what he experienced in movies. Some of us have experienced it ourselves. But most us go for years at a time without feeling it.

It’s that amazing feeling two humans get when, in a world of solitary people, they experience a deep connection with another person.

You sense the possibilities here in Spain on the Camino. The peregrinos are out looking for something – they’ve left the routine of their lives in the belief that perhaps, just over the horizon, they’ll bump into something that feels like destiny.

It’s love that explodes in the spirit. Love that says, “You were made for something more.”

The Camino starts out in the Pyrennes, winds down into Spain, and extends 500 miles to the ocean. People and their stories develop as they walk it.

For four years running he came back to the Camino. But this year, everything in life suddenly changed one day. It happened in the city of Burgos as he was waiting for the hostel to open.

He found himself talking with a Dutch woman named Nicolina. Tall and vivacious, she was easy to talk to. Conversations with perfect strangers are the norm on the Camino, but talking with Nicolina was different – the longer Enrico talked, the more he found himself attracted to her.

Having given up on ever loving again, Enrico was in unfamiliar territory. But he was intrigued and decided to take a chance. “I want to walk with you on the Camino tomorrow,” he blurted out.

As forward as that was, he couldn’t have dreamed that Nicolina would respond as she did: “It’s dangerous. Maybe if we walk together I’ll fall in love.”

“I was feeling the same thing,” he responded.

The next day they talked about everything under the sun as they walked the Camino. Her relationships, his wife’s death, and life on the way to the church where Saint James is said to be buried.

Four days later, we met them at a coffee shop on the way to Terradillos. “We’re in love,” was all they had to say, though it was plain enough.

Enrico had sensed it, but hadn’t dared believe it. Love happens on the Camino. It’s a glorious thing – a work of wonder and grace.

Finding true love anywhere these days is a cause for celebration, all the more so on an ancient pilgrim’s path in northern Spain.

Jesus went looking for fishermen. He looked for those who could translate their experie…
27 April 2017

What kind of story are you writing with your life? Is it one of great passions and struggles or i…