A story of my struggle to the death with one rooster

One of my rituals is to read the World Race blogs every day. Yesterday, Alissa Gibson shared something about roosters that reminded me so much of a story that took place when Karen and I were missionaries in the D.R. Here it is: Missionary life is anything but boring. We lived in a second floo…
By Seth Barnes
19 January 2007, 12:01 am
By Seth Barnes
19 January 2007, 12:01 am

One of my rituals is to read the World Race blogs every day. Yesterday, Alissa Gibson shared something about roosters that reminded me so much of a story that took place when Karen and I were missionaries in the D.R. Here it is: 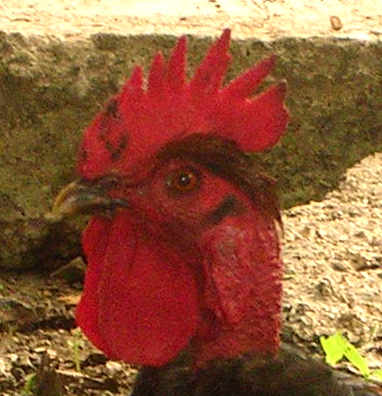 Missionary life is anything but boring. We lived in a second floor apartment in the Dominican Republic. It had five sides bordering a baker, a church, a garbage dump, a chicken slaughterhouse, and a house with a courtyard with a prize rooster that crowed constantly sitting proudly in it.

We had purchased a waterbed for $50 and every time one person would get out of bed, the other person would rise up on a tidal wave on the other. At night sometimes the rooster would crow for no reason at all and I would lay there with a pillow over my head until I couldn’t take it any longer.

I’d roll out of bed, causing my wife to rise up on a tidal wave on the other side of the bed. Then I’d go over to the window and shout down to the rooster in Spanish,
“Callate! Estamos tratando de dormir,” which means “Shutup! We’re trying to sleep.”

This was stupid for a number of reasons. First, chickens don’t respond like a dog to orders. Second, why was I yelling at it in Spanish? And third, the neighbors down below probably thought I was funny and were secretly laughing.

One night as I lay in bed with the pillow over my head, it occurred to me that I needed to kill the rooster. The next day I approached the neighbors and told them,
“Su gallo siempre esta cantando; yo lo comprare para $25.” Which means, “Your rooster is always crowing; I’ll buy him for $25.” Actually the word for “crowing” also means “singing.” The neighbor and I had debates about this odd translation. I felt that “gritando” would be a better translation, which means “shouting.”

In any event, the neighbor’s invariable response to my offers was, “That rooster is very special. He’s a prize rooster. We could never sell him. He’s our grandfather’s special pet.”

So we would continue to be awakened by this rooster two to three times a night crowing like a broken record. Until one evening I had an idea. I gathered some small pebbles and put them on the window ledge overlooking the patio where the rooster lived. Later that night when he woke us up, I went over and threw the pebbles in the direction of the rooster. Occasionally I’d hit him and he’d stop, but generally, the rooster was undeterred.

So I had another idea. There was a small ledge on our second floor apartment overlooking the courtyard in which the rooster sat. I filled up a bucket half full with water and went to sleep. Sure enough, that night at about two in the morning, the rooster began to crow.

I rolled out of bed, causing my wife to rise up as usual on her tidal wave. I went and got the bucket and crept out in the dark on the ledge overlooking the rooster.

The rooster was in high gear as I took aim and threw the water at it – a direct hit! It made a sick, gurgling noise, flapped its wings and stopped crowing. I was elated! After that, we slept like babies.

So began a regular ritual where the rooster would begin crowing, I would wake up, fill the bucket of water, and drench the bird. It made me feel a little guilty to be sneaking around in the dark and throwing water on a neighbor’s pet, but a man has to do what he has to do to sleep.

One evening, Karen was preparing a special meal for a dinner party. She had been cooking for a while and as twilight fell, all was in a state of readiness for the first guests. That was just the moment that the rooster chose to begin crowing. It was loud and incessant and threatened to ruin our party.

Knowing that the success of the evening was being threatened, I filled a bucket full of water and inched along the ledge in the gathering darkness. As I had done a number of times before, I threw the water in the direction of the bird and quickly scooted off the ledge.

As usual, there was a commotion going on down below and the bird stopped crowing. But then a voice called to me from down below. “Seth,” he beckoned. I walked to the balcony and could make out the shape of our neighbor boy. “What is it?” I answered.

I had no answer for his next question: “Seth, why did you throw water on our grandmother?”

The next day, the neighbor boy agreed to sell the prize rooster to me. He even cooked it up. I wanted to eat every bite, but it was a grisly, tough bird. Still, it was gratifying to gnaw on him for a while.

Unfortunately, word of the transaction quickly spread around the surrounding neighborhood. The next day a line of people appeared at my door offering to sell their pet roosters. That night, a whole chorus of roosters rang thru the night. I think I found a heavier pillow to put over my head.