I was talking to a friend whose 17 year-old daughter is a strong Christian. My friend noticed that she was growing distant and more defiant. “What’s up with that?” my friend asked, suspecting that her daughter was being influenced by someone, but not knowing who. Then one day, she was on the c…
By Seth Barnes
23 January 2006, 12:01 am
By Seth Barnes
23 January 2006, 12:01 am

I was talking to a friend whose 17 year-old daughter is a strong Christian. My friend noticed that she was growing distant and more defiant. “What’s up with that?” my friend asked, suspecting that her daughter was being influenced by someone, but not knowing who.

Then one day, she was on the computer and chanced upon her daughter’s http://www.myspace.com/ web site. What a shock! Her daughter had these cyberfriends who were writing her terrible things. Here’s what my friend wrote about it:

“Some were Christian friends from where she lived before, but there were some new cyber-friends that she had never met and knew nothing about. These so-called ‘friends’ were posting to her Myspace all kinds of immorality: words and photographs about partying, getting drunk, sexual innuendo, and self-gratification….also, the flagrant use of hard-core profanity used on the site was nauseating (by the way…myspace is not censored…so basically anything goes). Their plan was to get my daughter drunk on her 18th birthday and introduce her to the wild side of life.”

My friend said her daughter was devastated when confronted with the fact that her mom had been on her site. She told her, “I really don’t know what happened…it was like over time I started little by little, to slide into this trap…I rarely, if ever, curse, and I found myself starting to do it online to try to be apart of the crowd.” 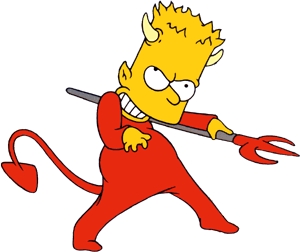 Looking back, it was obvious her friends were trying to glamorize their live-for-today lifestyle and entice my friend’s daughter to join in on the fun. My friend said, “My daughter learned a painful, but powerful lesson….that Satan doesn’t show up at your doorstep dressed in a red suit holding a pitchfork, but is a master deceiver who slowly and methodically attempts to chip away at your Christian foundation by any means necessary.”

If you’re a Christian, you know that Jesus fought against the devil and that you do too. Christians in many countries overseas don’t understand the hyper-rational perspective of American Christians. Spiritual warfare is an obvious and accepted reality.