Families are too small these days

Families in America and in other western countries are too small these days. They barely keep up with the replacement rate (2.1 children per couple) and in some countries like Spain, the rate is so miniscule, the population will be almost halved in a generation. But statistics aside, there is…
By Seth Barnes
29 March 2007, 12:03 am
By Seth Barnes
29 March 2007, 12:03 am

Families in America
and in other western countries are too small these days. They barely keep up with the replacement rate
(2.1 children per couple) and in some countries like Spain, the rate is so miniscule,
the population will be almost halved in a generation.
But statistics aside, there is a very common sensical reason why families
need to be bigger. 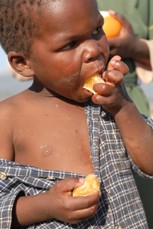 In small families, you as a child become more inflexible and
demanding. You rarely have to compete
for resources and often find yourself being consulted for your opinion. You acquire an opinion of your own importance
that is sadly out of synch with reality in the cruel world outside the four
walls of your home.

In contrast, big families are a Darwinian,
survival-of-the-fittest free-for-all – you are definitely not the center of your
own universe. Anything you can claim as
your own you are darn glad for. By
virtue of the fact that you are sharing bathrooms and wearing hand-me-downs,
you are afforded protection from the narcissism that is in full flower in our
society. You learn thankfulness for even
small things.

Ben Messner made this point about a rather large family in India: “I was deeply challenged
tonight as I listened to an incredible man from India (Babu
CJ) share how he was the father to 300 children! He began
inviting orphans into his home about four years ago, and now his family has
grown to over 300. This man is not just
a leader who tells stories to get money or make a point about how people should
care about orphans. He knows each of
them by name, and he knows all the details of their story. He has suffered intense persecution on their
behalf. He is their father.”

If you read the
blog about Pastor Walter in Swaziland,
you’ll recall the tragedy that he is up against as most children in his
community are refugees from their own families, families devastated by HIV/AIDS. Pastor Walter is the only father figure many
of them know. Walter and Babu don’t have
the luxury of getting a perfect plan together to address the needs of the
children they have taken into their homes.
Their “strategic plan” is to open their homes to any needy children who happen
to wander by looking for a crust of bread.

When someone asks me, “Do you think we should have another
child?” I tell them, “Absolutely – it will
be the best thing you ever did! We need
more of the kind of world changers you’re going to raise!” Better yet, move to India
or Swaziland
and help Babu or Walter take care of the hundreds of sons and daughters that
they’ve adopted into their families. I
think they’d tell you, families are too small these days.