In the last post, Liz Ogletree describes her experience of escaping death in a dark tunnel. She and her team went from Central America to Thailand where they ministered to women caught in the sex trade. While there, Liz asked God to help her understand what they go through. In response, God took …
By Seth Barnes
23 January 2013, 12:01 am
By Seth Barnes
23 January 2013, 12:01 am

In the last post, Liz Ogletree describes her experience of escaping death in a dark tunnel. She and her team went from Central America to Thailand where they ministered to women caught in the sex trade. While there, Liz asked God to help her understand what they go through. In response, God took her back to her experience being trapped and feeling like she was going to die. 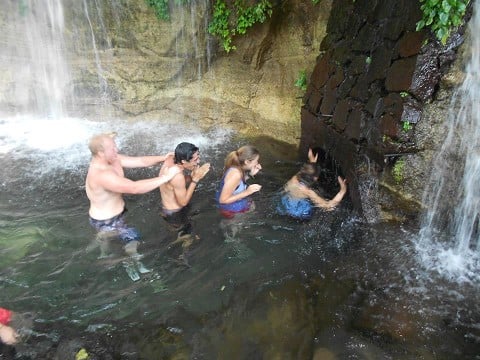 After I asked God to show me what it felt like to be trapped in the sex trade, He took me back to the day I got trapped in the tunnel in El Salvador. He brought all the emotions flooding back.  He then told me the feelings I felt that day in the tunnel are the exact feeling many of these prostitutes feel. TRAPPED.

Although I know the ending, today I was put back in that place and experienced all the emotions once again.  I was able to feel exactly how many of these girls feel. LOST. HOPELESS. SCARED. DEAD.

As my mind left me sitting in the tunnel, I got nauseated.  Literally, I felt like I was going to throw up.  My mind kept replaying it in my head.

I started remembering how difficult it was to fight the current.  How every time I would pull, I had to use every ounce of strength in me and the water current still fought me.  It tried to force me back into the trap. Back into the darkness.

I realized how there was truly no hope in my own strength that day.  There was no way I was coming out of the darkness on my own.  If I would have tried, right now I would be dead in the back of that dark tunnel.

The same goes for these women trapped in the sex trade.  They can’t do this in their own strength.  They can’t fight the world on their own.  They need Jesus Christ.

It is crazy that as the Lord has taken me back to that day, each time He reveals something new. The first thing He showed me was how much He loves me.

Now as I process this again, He is teaching me that He is trustworthy.  I can depend on him. I don’t have to worry about my future.  Finding a job, having enough money to support myself, etc.  As my mind goes back in the tunnel, I know I don’t have to fear.

I should be dead, but I am His child and He loves me and rescued me.

Just as God delights in me (Psalm 18:19), so He also delights in these women.  He loves them.  They are His children and He wants to rescue them from their darkness.

What it feels like to be sold for sex

Micah Thomas used to live in Atlanta and work in public broadcasting. A new Christian, she descri…