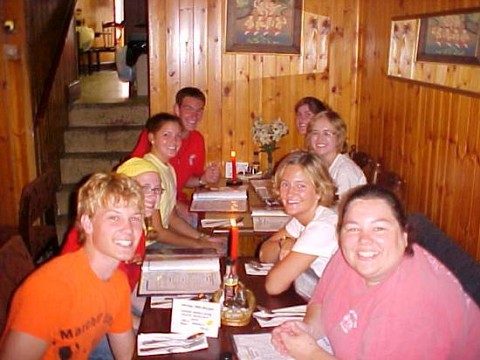 The American Church model of body life is about as far from Jesus’ model as it is from here to Jerusalem. All my life I’ve hungered for more than the Sunday morning/Wednesday evening practice that is the staple in most churches. I never understood that we can only come fully alive in a group context – amongst brothers and sisters who believe in us and call out the God-life in us. As individuals, we are unconnected and incomplete.

Jesus had a lot of disciples, but he chose 12 and designated them as apostles. The crowds of disciples came and went, but the Twelve went everywhere together. They were with one another 24/7 over a period of about three years.

During that time, they got to know one another well. They jostled for position; they fought with one another and learned ministry together. In the process, they formed a group identity and experientially learned what it means to function as the body of Christ. They learned that they needed one another.

Look at the examples of Jesus interacting. Their “group-ness” was a key factor in Jesus discipling them: “When morning came, he called his disciples to him and chose 12 of them.” (Luke 6:13), “When Jesus called the Twelve together, he gave them power and authority…” (Luke 9:1), “An argument started among the disciples as to which of them would be the greatest.” (Luke 9:46), “They found the Eleven and those with them, assembled together.” (Luke 24:33)

If you’re in a church where no one knows the real you and you feel like every time the pastor asks you to stand up and greet your neighbors that you’re engaged is some kind of a charade, recognize that if it feels phony, it probably
is phony! Small groups are the real church that the Bible talks about in Hebrews 10:25 (when we’re told not to give up meeting together). That thing we do on Sunday morning may help you in other ways, but it is no substitute for what Jesus modeled for us.