Learn listening prayer – our gift to you 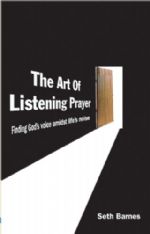 Last summer, I signed up to be part of an online discipleship group through thisblog.  I had no idea what I was getting into, but I just knew that I was craving community and challenge with other women.  Kathy Lucas was the leader for this first group, and soon we began the introductions (over email) of 8 women from all over.  Our ages, backgrounds and experiences varied widely.  We set out to go through the book Listening Prayer and agreed to do a conference call  and emails each week.

So… the first four weeks of conference calls.  It was awkward and a little hard to share personal things with complete strangers.  At that point, I was committed to finish the book and then just be done with this whole online discipleship thing.

But around week 5… something started to change.  As we  started to get to know each other and became more honest about things God was saying to us, we were amazed to find out He was saying similar things to each of us!  Over the next month or so, we committed to  more prayer for each other, and God truly knit our hearts together.  I could tell something had happened when I was facing a major life decision in December and my first response was to email this group and ask for prayers of wisdom, because I knew they would do it!

By the end of our first book, we had a core of 5-6 women, and we decided to continue on with another book to study.  I also then felt God prompting me to share this with others, so I invited some friends and launched another women’s listening prayer group with 8 new women.  That group has communicated solely over email, but has been an encouragement and challenge to me as well.

Now… the good news is that God is multiplying this movement!  Of the first two groups, two women have launched new groups with their friends, and three more are ready to start new listening prayer groups for women who are looking for discipleship.

The leaders of the new groups are excited to lead women in seeking the Kingdom first!  Each new group will determine if they will primarily use email, conference calls or a mixture of both for their communication.

Six months after I signed up for that first group, I now have two groups of Christian sisters around the country.  I often forget that I have never even met many of these women face to face because they are some of my strongest supporters in life! Together we are encouraging each other to seek Christ and His Kingdom first, and growing together in what that really means.  Although the official group study has ended, the relationships are just beginning, and I can’t wait to see where God leads us next as we make plans to meet and share in ministry together in person!

For any women out there who desire to go deeper with God and other women, I highly recommend that you sign up here and try it today!
If you’re interested, please click the “Need Discipleship” button above and someone will give you more information. Or, feel free to email me. We promise this thing is low key and human. It’s designed to connect you to people like yourself and to God.