Led where you don’t want to go

“When you were young you dressed yourself and went wherever
you wanted; but when you are old, you will stretch out your hands, and someone
else will dress you and lead you where you don’t want to go.” (John 21:18) 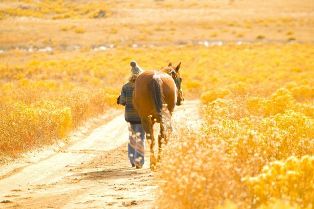 I had nothing burning in me to help orphans in Africa. The first
time I bumped into the victims of the sex trade, in Asia,
I didn’t feel compassion.

When I was
young, I was motivated by adventure. Now
that I’m getting older, Jesus often leads me where I don’t want to go.

Isn’t that the essence of Lordship? A Lord leads you where you don’t want to go.  Someone with authority is going to feel resistance when he has to invoke it.  He’s been given the authority to get hard things done and, if he’s benevolent, to cause growth in the process.

When Jesus tells Peter he’ll be led where he doesn’t want to
go, he’s preparing him for more misadventures like the one with the rooster on
the morning of his death. Riding with
Jesus through this dark world is a bumpy ordeal.

We are here not simply to hang out with him
or eke out a living. He has us here to
take back territory from an implacable enemy and to establish the Kingdom in
its place.

It’s a task that involves pain and often extreme
discomfort. When we’re young, we dress
ourselves and set our own agendas. But
as we walk with Jesus for a while, the things that burden his heart begin to
touch ours as well.

We’re God’s
agents. The faces of orphans begin to
haunt our dreams. Pain-filled places we
would never choose on our own become our destination.