Muslims seeing Jesus in their dreams

I’m in Florida on vacation and today we celebrate Karen’s birthday. She’s the woman of my dreams – so this is a day to have a party! If you comment on this blog, please post her a birthday wish below and I’ll pass ’em on to her at the end of the day. We’re having a blast. Vacation is a time when we get to look at the big picture of life and consider what God is doing in the world. Here’s a recent report from the middle east: 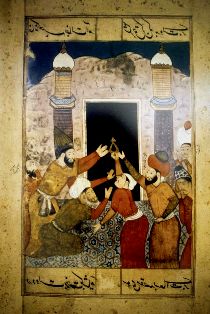 “We had the opportunity to
meet with a community of Muslim believers and encourage them as they shared
their testimonies, burdens, and needs. Mustafa,
a Muslim journalist, shared his story with us.

“He had wanted to investigate the
Christians in that country and to report on their involvement in terrorist activity,
according to the religious leaders there.
He started to attend a secret church, learned the Bible, and pretended
to be a Christian. He was even
baptized.

“However, at the same time he was
betraying the new converts through the news and the secret police. Several months went by and as he studied the
scriptures, he realized that his holy book was not making sense, and the Bible
had the truth.

“So after months of struggling,
confused, he asked God to manifest Himself.
One night the Lord appeared to Mustafa and spoke to him in a dream. Mustafa immediately knew the man in his dream
was Jesus. When he awoke he did not have
any doubts in his heart and gave his life to Jesus. Mustafa went before the church and confessed that
he was the one who betrayed them. The
brothers forgave and restored him.

“Now Mustafa is one of the leaders
in that particular church. We met him
and his wife where he shared his testimony.
We were able to pray with them and encourage them. Mustafa’s family has rejected him, he has
lost his job, but he rejoices in his salvation. It was a privilege to meet
them.”

There’s a story that makes you say, “WOW!” But it’s just one of many that we hear. God loves Muslims and wants to see them encounter this Jesus whom they revere as a prophet. He wants them to meet him as a person and to follow him as a Lord. He’ll use any means necessary to break through to those who are persecuting him.