When we started the World Race in 2006, we sensed that we were onto something. As the three vans left Matamoros for Chiapas and ports south, who knew what adventures lay ahead?   Five years later, it’s become a phenomenon. We expect to take close to 600 racers around the world …
By Seth Barnes
16 December 2011, 12:12 am
By Seth Barnes
16 December 2011, 12:12 am 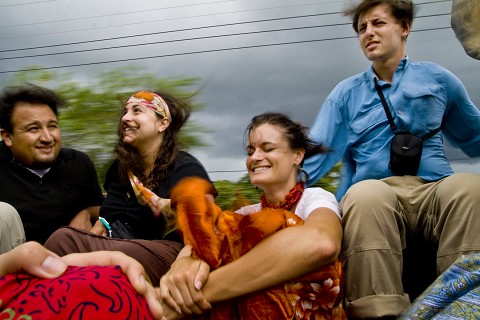 When we started the World Race in 2006, we sensed that we were onto something. As the three vans left Matamoros for Chiapas and ports south, who knew what adventures lay ahead?
Five years later, it’s become a phenomenon. We expect to take close to 600 racers around the world in 2012. A generation needs initiation and they know it.
Yes, they’re attracted to the adventures they know they’ll have along the way, but something else profound happens on the race:
They begin to see the world and themselves in it as God does. They begin to walk in community. They begin to grapple with issues of identity, purpose and kingdom in ways that change their lives.
When I saw this, I realized that it was unlike any ministry I’d ever seen before. I realized that, in fact, what racers were  experiencing was like what I’d experienced, what had changed my life. It was an Aha! moment. We’d stumbled upon a pattern that Jesus himself established that almost always changed people.
Kingdom journeys are a kind of spiritual discipline that Jesus gave to his disciples and that the church has known about but forgotten. It’s a discipline insofar as it takes us to places we need to, but don’t want to go.
So I decided to write a book called Kingdom Journeys: The Lost Spiritual Discipline. It’s taken me four years to understand and describe what happens on kingdom journeys, but this past week I finished. I sent an advance ebook version to the 40 blog readers who signed up to give me feedback on it.
Last night I sent it to a coworker. I was gratified to hear back from her this morning:

“I read your book tonight.  I meant to look it over and catch the essence, but found myself on each page slowed down by the stories and the truths- caught and pulled in.  It is beautiful in the way that stainless steel counter-tops are beautiful-in  necessity and simplicity and absoluteness.”

So many times in the writing process I realized that I didn’t understand enough about what journeys do to people to go any further in my writing. As I observed them require people to abandon everything as Jesus had his disciples do in Luke 9 and 10, I saw those journeying colliding with their own brokenness.
But then, almost without fail, I saw them move on to a place God wanted them all along – dependence on him. And the growth that followed was astounding.
It’s a thrill to have finished. It about wore me out (as it did the people like Joe Bunting, Jeff Goins and Robert Sutherland who helped me). I think the book could help a lot of people, so I’d like to ask for your help in getting the word out about it.
We hope to have it printed by February.