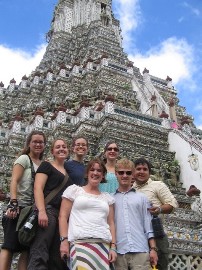 The World Race is doing something new and exciting this month – they are
giving the extraordinary and awesome gift of experiencing the World
Race culture without the necessary sacrifices of an 11-month commitment.
It’s a single month simulation
set to the tune of Haiti relief. Aaron Bruner and I are
guiding it on the ground.

We recently ran into a problem…

A
parent had a conversation with her daughter about how she was sick. The
person was probably venting a little, maybe communicated some weariness
and transferred some of her frustrations. In response, the mother
contacted AIM, saying that they need to send her daughter home. To put
you at ease before reading on, we had the participant call her mom and
calm her down. She is still here and doing very well.

The point
of my writing this is to propose a great “way” for parents of World
Racers to follow. I write this from the perspective of a World Race alum
whose parents were influential in my having a stellar overall
experience, filled with brokenness, confusion and frustration.

When your son or daughter contacts you in
tears and at the end of themselves…
…Encourage them to
wrestle through it.
I remember a time in Cambodia when I was
completely at the end of myself. I was all but done with Christianity,
with God, with prayer and with the World Race. I remember talking with
my dad about it, venting all of this to him. He told me that God wasn’t
offended and that he could take it. He recommended I voice my
frustrations to him, that I journal my feelings and thoughts, that I
process them thoroughly and remain fully in them for a time. I
did, and three days later I had the
greatest
God experience of my life.

When
your son or daughter is sick and bed-ridden…
…Pray for
them and trust AIM leadership enough to know that they will take care of
your son’s or daughter’s needs.
I remember being bed-ridden sick for
over a week in Mozambique. I was throwing up, I had awful diarrhea and a
high fever. Conditions were far from perfect, too! We were taking
bucket showers, I had to fetch water and dump it in the toilet for it to
flush, it was hot! and I was
sleeping on a couch in the living room where people were walking through
and making a bunch of noise. If there ever was a time I wanted to be
home, it was then! My parents recognized that this is just a part of it,
though, and knew that I’d get through it in time. And I did.

Know that they will feel…
…Hurt,
misunderstood, confused, frustrated, and just downright awful
sometimes. Talk through this with your son or daughter before they leave
and release them to experience these difficult emotions, realizing that
they are all a part of growth.

Realize that they are adults…
…Think
back to when you “left the nest” and, knowing and feeling what you do
now as a parent, put yourself in your parents’ shoes. Imagine what they
may have felt; how difficult it must have been to let you go. But it
needed to happen. Then try to put yourself in your son’s or daughter’s
shoes. They are not kids anymore. It is time to let go.

Release them to God…
…Trusting that He has
ordained their steps. Love them enough to walk through extremely
difficult times with God and community. This refines them and they will
have far greater character in the end! Read and study James 1 with your
spouse and commit your child to the Lord.

I’m still young
myself, but I imagine releasing your son or daughter may
be the most difficult thing you’ll ever do. The rewards are worth it!
Your son or daughter will honor and respect you for it. They will seek
you out. They will love you well. You will connect on a deeper level.
Your relationship will be strengthened and will grow in greater depths
than you ever would have thought.