On the graduation of my son from college

Here in Indiana, my one and only son, Seth, graduates today. Wow! It seems just like yesterday we were graduating him from high school and here he is finishing off college. One thing about Seth – everybody loves him. I went back to something I wrote about him then. It applies today: …
By Seth Barnes
19 May 2007, 12:05 am
By Seth Barnes
19 May 2007, 12:05 am

Here in Indiana, my one and only son,
Seth, graduates today. Wow! It seems just like yesterday we were
graduating him from high school and here he is finishing off college. One thing about Seth – everybody loves him. I
went back to something I wrote about him then. It applies today: 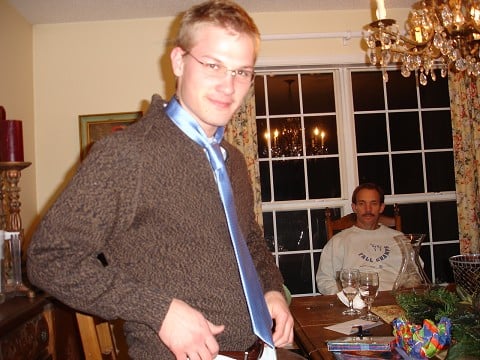 I liked to shoot videos of the kids while they were growing
up. Seth was not a spontaneous a
performer for the video camera.
Typically I would film a scene of the girls cavorting and running amok
and then pan to a shot of Seth quietly contemplating an insect crawling up a
blade of grass.

In one classic scene, all mayhem was breaking out in the
family room as our little women terrorized one another. After about half an hour, I noticed Seth (who
was about seven at the time) quietly drawing something in the corner. “Seth, what are you working on?” I
asked.

“A pilgrim,” was his reply.

Seth has always been known for his equanimity in the face of
crisis. When everyone else would be
running around waving their hands and shouting, he was calm. Look at him now playing the bass in his band
and you’ll see what I mean.

Perhaps because he’s been surrounded by women all his life,
he’s not been particularly phased by their attention. As he got older, his sisters got used to
fending off giggling requests for introductions to him.

We’ve watched with the pride that only a parent can know as he
didn’t fall into the traps of rebellion and rotten attitudes that independence
can bring. They’ve pursued their own
individual relationships with God with a maturity that belies their years. For the last two years, they’ve met with me
most mornings before school to pray and study the Bible. They’ve developed their own ministries
discipling peers.

So today, Seth is graduating, not simply from school, but into
adulthood. He’s excelled in every arena
where it counts. All of us are very
proud of you, Seth. Your friends and
family love you.