Sean Taylor’s revenge will have to wait

If you want to know how I felt about Sean Taylor’s murder at the hands of four Florida punks, read my earlier blog. Thousands of Redskins fans felt the same way. We were stunned and overwhelmed. When they found out who had done it, my visceral response was: “They should die, too.” And…
By Seth Barnes
05 December 2007, 12:12 am
By Seth Barnes
05 December 2007, 12:12 am 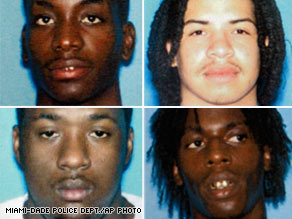 If you want to know how I felt
about Sean Taylor’s murder at the hands of four Florida punks, read my earlier
blog. Thousands of Redskins fans
felt the same way. We were stunned and
overwhelmed.

When they found out who had done
it, my visceral response was: “They should die, too.” And that’s where my feelings slam into my
faith.

I follow a master who said the
most outrageous things: “You have heard
it said, ‘Love your neighbor and hate your enemy.’ But I tell you: Love your enemies and pray
for those who persecute you.” Who says
that? Yet it was his first message and
his last.

I mean, if you look at the pictures
of his murderers, you see none is more than 20 years-old. What were they thinking, breaking into
another man’s home to take what was his?
And more galling still – they drove all the way across Florida
to do it. What motivates such people?

So, the news today is that they
are all on suicide-watch. They have to
wear clothes that can’t be ripped so they can’t hang themselves in their cells. Yeah, kids, you should have thought through
the ramifications of breaking into another man’s home with a gun and then
firing it at him. Fine time to be
remorseful now that you’ve left his baby daughter fatherless. To say nothing of the fans who looked up to
him for coming out of a tough neighborhood and making it in the big leagues.

The movie Dead Man Walking does a good
job of depicting the forgiveness we’re supposed to show in the face of evil. It’s the essence of the gospel. It’s grace at its most scandalous. As senseless as was Taylor’s death, the irony
is that another apparently nonsensical act – forgiveness – should redeem it.