This ministry changed my life

Several months ago, CBS News did this special on 48 Hours called The Lord’s Bootcamp. It’s well done, relatively even-handed in it’s treatment of a Christian cultural backwater that is decidedly not PC. I had a special interest in watching it, since I’m a product of the ministry.   In 19…
By Seth Barnes
03 August 2009, 12:08 am
By Seth Barnes
03 August 2009, 12:08 am 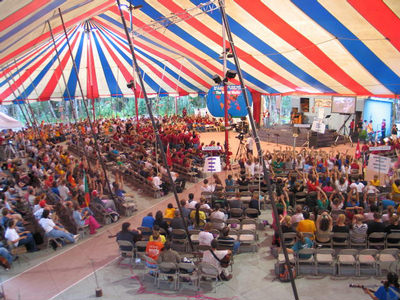 Several months ago, CBS News did this special on 48 Hours called The Lord’s Bootcamp. It’s well done, relatively even-handed in it’s treatment of a Christian cultural backwater that is decidedly not PC. I had a special interest in watching it, since I’m a product of the ministry.
In 1975, I went on a Teen Missions (TMI) trip to Guatemala. It was a powerful experience, taking me out of the American bubble I’d grown up in. But to get there, I had to first attend a mosquito-infested camp a few miles from Cape Canaveral. All I remember about the place is that it was steamy hot, we got chigger bites around our ankles, and I seemed to be perpetually getting in trouble with the powers that be.
Bob Bland, founder of the ministry, realized that young people need training if they are to succeed in a foreign environment. He carved a rustic camp out of the swamp land in order to train them. We learned to lay blocks and we got to know our teams. Every morning our teams would run the obstacle course – generally the highlight of my day since I enjoy competition.
Less thrilling were the “special blessings” that leaders regularly doled out on the theory that adolescents are born rule-breakers and you need to deal with attitude issues aggressively. I wasn’t a bad kid, but I remember pondering the irony of being blessed by digging ditches with my fellow troublemakers. We always seemed to be running afoul of the law for some reason or another. There was one way to do things and if you tried a different way, well, God bless you.
The amazing thing is that, despite all the retrograde cultural idiosyncrasies that color the TMI ministry, God has used them to produce so much fruit. God doesn’t seem to be too concerned about our style. Bland has got to be about 80, and he is still front and center, leading the ministry. They’ve worked with 200 ministries in 110 counties. And I, for one, am now in ministry as a direct result of TMI, running my own camps to prepare the young people we send around the world.
Yes, there’s so much I would change if I were in Bland’s shoes. But he and his ministry threw me in the deep end of the pool and got me going when I was just 17. I experienced a TMI that wasn’t perfect, and it has it’s share of critics. But there’s something to be said for a lifetime spent taking a chance on young people.