Too much success too fast 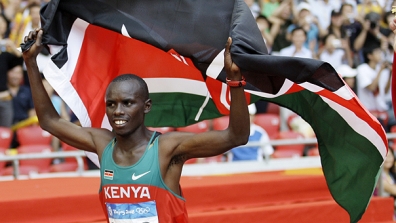 The Millennial generation needs more failure. It’s a paradox that too much success in the short-term can impair your long-term prospects, but it’s true. American young people in particular have won too many Little League trophies they didn’t earn.

But the syndrome is not confined to the U.S. Kenyan Olympic marathon champion Sammy Wanjiru gave us a fresh example of this yesterday. If you believe those who knew him, he died in part because of this syndrome. The facts are that Wanjiru fell from a balcony in Kenya as the result of a domestic dispute. But those who knew him saw a pattern of behavior that was rooted in all the success he had, success that began at a young age.

Jos Hermens, a long-distance expert said this about Wanjiru’s death, “It is incredibly sad. An Olympic champion at 21, he was poised to become the world-record holder in the marathon. He could not deal with all the luxury. It all went too fast, too much money,” Hermens said. “He just could not deal with it all. He was a lion of a man, and he departed us in much the same way.”
Too much success causes a person to take good things for granted. Amplify that success to a place of stardom and it can feed a person’s ego and set them beyond the reach of accountability. Their behavior may become eccentric and irrational. Think about the skewed behavior of a Hendrix, Morrison, Joplin, Elvis, Cobain, or MJ. The musical artist who skyrockets to fame, can’t handle success, and self-destructs has become so common it’s a cliche.
Young people need to put things at risk if they are ever to appreciate their value. And if they fall flat in the process, then that is normal. Pain can be good. When I take young people to Moldova, they appreciate freedom. And in places like Swaziland, they appreciate food.
To be successful in the long-term, people need more short-term pain. When failure comes, it should be celebrated; it’s a necessary part of the growing process. Jesus didn’t leave home till he was 30, repeatedly got tossed out of places, and ultimately died a convicted criminal. Lincoln lost eight elections. Mother Teresa noted in her journals that she felt like a failure.
Failure gives us perspective. We can’t always win in life. You learn most new things by falling down in some way repeatedly. Failure shows us the value of hard work. Gladwell cites studies that it takes 10,000 hours to become an expert in many disciplines.
If you feel like a failure lately, it may be a good thing and I have an idea to emphasize the fact. We should get a group of you together at my place and throw a party.
You’re probably already well on your way to becoming a success. Let me know when you and your awesome friends are coming over.