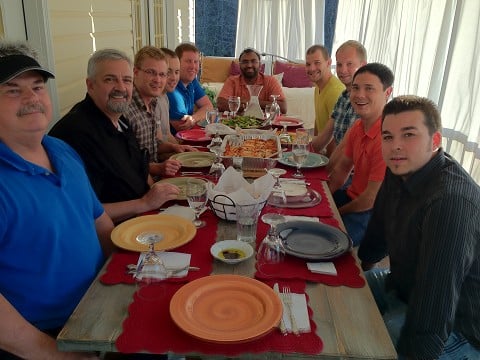 I get together with a group of young men on Tuesday evenings. We talk about issues that are important to them. I may do some teaching if it’s relevant. I may give advice if it’s helpful. We often look at Scripture. We pray together.
Afterward we share a meal that the three K-girls have cooked (Karen, Kacie, and KK).
Tonight the meal was a wonderful shepherd’s pie. Way too much of it. Plus salad, fresh string beans, and a delicious apple pecan cake. The evening sunset was perfect from the porch. We had a lot of fun talking about life.
Earlier I invited Kacie and KK in and posed a question to them, “When these guys one day die, what do you think each of these guys’ wives will say at their funeral?” Then I asked the guys what they would want their wives to say. They wrote down their answers and compared notes. Far from being morbid, it was a liberating and focusing exercise.
It’s probably the easiest discipleship investment that I make, just one piece of the whole. I also periodically meet with them one-on-one. If I’ve done a good job of praying about it, and God has spoken to me, I might challenge them.
On weekends, we may go into Atlanta to do ministry. We love attending an Indian church in Decatur when we’re there.
One of the tougher things I get to do is to send them away to help lead efforts around the globe. Sometimes the assignments are painful and pressure-filled. It was tough on Neil when he was surrounded by death while leading a team for multiple months in Swaziland. Seth’s year in Nicaragua was stressful, but it helped him to mature.
Later, these experiences equipped them to lead our Haiti base after the earthquake. When we started the Kingdom Dreams ministry together, they were able to take their game to another level because they’d been tried by fire.
The other guys are on similar tracks. If they’re up to it, they get a greater dose of challenge. They get to build the Kingdom in dark places. We get to see what their faith looks like when it’s tested. My goal is to ultimately release them somewhere in the world God wants them.
Tuesday nights are great, but the model of discipleship as a passive thing – a living room-based activity only – is broken. Jesus had great times hanging out with his guys, but he raised up his disciples in ways that they had to sink or swim as they exercised their faith. It’s a model that still works.

Three things Jesus does that we don’t do

G.K. Chesterton said, “The Christian ideal has not been tried and found wanting. It has…
02 April 2014

How to Use Scripture to Disciple

The last thing Jesus said was, “Go and make disciples.” Do you ever find yourself wondering, “How…
04 February 2014

Ever get frustrated with your family? You wish they would change, you pray for their change, but …