What is the 42nd Generation? 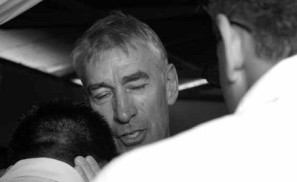 Andrew Shearman has this message he preaches called “The 42nd Generation.” I first heard him share it in Brownsville, Texas
about 14 years ago. The point of it is that there is a generation that will
come to faith and cross over the Jordan.

Adam lost his birthright – the title to stewardship of this world. But God had a plan for getting it back. He
had a second Adam. As the New Testament
opens up in Matthew 1, we see it. In
apparently boring detail we see there were 42 generations from Abraham to
Christ. Why does God begin telling the story like this?

As Andrew explains,
the secret is that Jesus the Christ was the 42nd generation – the generation
that gets the Promised Land. And so, in
our day we can align ourselves with that generation – a generation coming to
faith. Here is the first part of the talk in its essence:

Numbers in the Bible do have some
significance. And the number 42 has
generally been considered to represent the coming of Christ. Take a look at Mathew, chapter one. It tells the genealogy of Jesus. Verse 17 says “Thus there were 14 generations
from Abraham to David, 14 from David to the exile to Babylon, and 14 from the exile to
Christ.”

The problem is if you count up
all the generations, they only add up to 41. We know that the Bible does
not lie, so what’s up? Either the Holy Spirit made
a mistake, or there’s a mystery we need to try to understand. There are only 13 generations
from the exile to Jesus. But the
text says “to the Christ.” Matthew 1:16 says, “Mary of whom was born
Jesus, who is called Christ.” The 42nd
generation is between Jesus and Christ.

Jesus came to earth, undressing all the way to enter his humanity. Jesus was the
man part of God and Christ is the God-part.
Yes, they are one and the same, but they are also different. The 42nd generation that this text
is talking about not only was Christ himself, but also is us, the body of Christ. And to that extent, the 42nd generation will come about when Christ is formed in us as the body of
Christ.

Mathew 16:13 says, “When Jesus
came to the region of Caesarea Philippi; he asked his disciples, “Who do people
say the Son of Man is?”

They replied, “Some say John the
Baptist; others say Elijah; and still others Jeremiah or one of the prophets.”

Simon Answered, “You are the
Christ, the son of the Living God.”

“Who is the Son of Man?” Jesus asks, narrowing it down. Jesus always narrows it down, “What about
you, Peter, rock (church)?”

And the Church has locked itself
down very often in a sinful simplistic acceptance of the wonderful Jesus as
savior. It has refused to grow up into
Christ. That’s why Paul said, “I labor
until Christ is found in you.” The whole
point of the Church is to get Christ formed in us. We must get past elementary things. We must move beyond the need for more inner healing and
deliverance. If you have that need, get it
and let’s go. Get healed. Get over it. Let’s get out of the bed. We need the bed. We have got plenty of beds, but churches are more than hospitals. You can stay in
the hospital while you get healed, but you need to walk in health.

Continued in: The 42nd generation stops en route to your destiny (Pt. 2)