Last week, I blogged about Southern women and in an effort to balance that blog out, yesterday I addressed the subject of women who respond to God’s call better than men. Let’s explore that subject some more today.On a mission trip I led to Peru in 2002, when it came time for our team to do sp…
By Seth Barnes
27 February 2008, 12:02 am
By Seth Barnes
27 February 2008, 12:02 am

Last week, I blogged about Southern women and in an effort to balance that blog out, yesterday I addressed the subject of women who respond to God’s call better than men. Let’s explore that subject some more today. 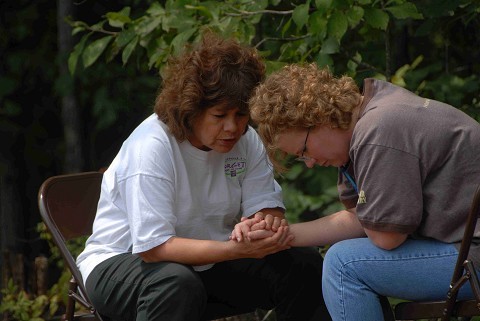 On
a mission trip I led to Peru
in 2002, when it came time for our team to do spiritual warfare, it was the
women who were best equipped to do it.
The team’s female leader, Mary Lou Jackson, was our most spiritually
sensitive team member.

She was prepared
to pray for another person’s healing or deliverance no matter how long it took,
no matter the hour of day or night. No
one could match Mary Lou for boldness in confronting the enemy. Before meeting Christ, she had been a witch. She knows how ruthless our enemy can be and
she knows the authority she’s been given to take him on in combat.

It
was the female followers of Jesus who were the last to leave him at the cross
and the first to believe in his resurrection.
Some of the greatest spiritual warriors down through history have been
women. What better example in the last
century than Mother Teresa?

She ventured
into India, a nation where the wives of men who died prematurely were expected to burn themselves
alive on their husband’s funeral pyre. A nation with a thousand Hindu gods. And then there’s her predecessor in the previous century, Amy Carmichael, a woman who rescued
hundreds of orphans from lives as temple prostitutes.

Women
have always been on the cutting edge when men have lagged. When Paul Cho, pastor of the largest church
in the world (750k or so), wanted to start small group fellowships, his elders turned him
down. Hearing this, the women of the church stepped up and made his vision happen. Eventually the small groups were so
successful, the men of the church had to get involved.

Yes, consistently in
Scripture we find that men were chosen to lead.
But when they don’t lead, women must rise up (and, let’s be clear, oftentimes, a woman leader may be God’s first choice for a ministry).

“Women have often been the backbone of mission work. Sometimes they went to the hard places, and
this was not necessarily because the organization or the mission chose that
path, but it was because there were no men to do it. Two women missionaries worked hard to
translate a portion of the Scriptures for the Uduk, handed them out in Sudan just
before they were kicked out by the government.
Many years later, when someone could get “back in”, they found
that the Uduk had gone from about 5% Christian to about 95% Christian.”

Bransford goes on to wryly note that too many men are
occupied with careers, improving their golf scores, and putting money in the
bank, while the women of our generation are winning the world for Christ.

Paul
told Timothy not to allow anyone to look down upon him because he was
young. Neither should women allow their
gender to be an excuse or get in the way of fighting to usher in the kingdom of
the Lord. Jesus showed a deep respect
for the role of women in building the kingdom.

We need to honor our women, who, seeing the plight of the widow and the orphan around the world, step up and bring hope. And at the same time, it’s time for more men to stop abdicating and start leading.
Also, check out: Women seem to hear God better than men