You were made for greatness

After his ordeal in the ocean, Jonah engaged God in a heated argument. Jonah dreamed a small dream of comfort and self-preservation. All he wanted to do was sit under the shade of a vine and pout. God killed the vine, his comfort, and his small dreams in order to lift up his head and show him a m…
By Seth Barnes
01 August 2007, 12:08 am
By Seth Barnes
01 August 2007, 12:08 am

After his ordeal in the ocean, Jonah engaged God in a heated argument. Jonah dreamed a small dream of comfort and self-preservation. All he wanted to do was sit under the shade of a vine and pout. God killed the vine, his comfort, and his small dreams in order to lift up his head and show him a much bigger dream – God’s dream for an entire city. Jonah’s response was petulant: “I am angry enough to die.” (Jonah 4:9)

The history of the faith is one of this kind of struggle, it’s the story of people moving from the safety of comfort to the greatness that comes in pursuing God-inspired dreams. From the original apostles to Mother Teresa, Jesus’ light has shown most brightly in the faces of his disciples confronting darkness. The problem is that at first blush, God’s dream often looks like death and, like Jonah, we resist it.

God is more interested in our character than He is in our comfort. The whole point of this blog is to help us wrestle with the notion that we find our destiny in abandoning the moorings of a comfortable world in order to launch out into deep waters. 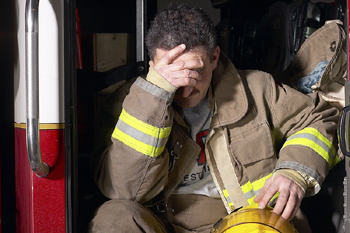 Right after 9/11, my friend Bill Britton ministered at Ground Zero in New York City. The wreckage of fallen buildings lay in jagged heaps on the ground. The body count was rising daily.

Bill described a fireman playing a kind of requiem on the bagpipes for his lost friends.

“I turned to see and there in the brightness of artificial lights was a lone fireman in full gear blowing forcefully into his instrument. The look on his face is indelibly etched into my heart and soul. The image caused me to weep.

“The fireman-musician looked forlorn, his eyes red, his cheeks puffed as he struggled, as if desperately trying to breathe life into someone he knew was dead. We had heard that only an hour or so before, another brother fireman had been pulled from the rubble (about the 10th since we arrived here). It was as if his bagpipe was his fallen comrade and somehow he wanted to bring him back to life; yet knowing he couldn’t, his heart was broken.”

Bill’s experience illustrates the battle for life and the dreams that give us hope. The devil breaks our hearts to squash our dreams. His strategy is to beat down God’s greatest creation. If you’re like most people, eventually you start to believe the lie that you were made for small things, not greatness. But God resurrects hope from despair, allowing our hearts to break in order to give us new dreams, dreams of building his kingdom with him. God has a message for you: He has made you for greatness. And until you embrace this hope, you will never achieve all that He has planned for you.

The colloquialism, “God don’t make no trash” is true. You were made to soar, to escape gravity’s pull and fly free above the earth. You were created with songs to sing, hearts to win, the glory of God to reflect.

Somewhere down deep we all suspect that this is true. Trapped in a world that is often gray and featureless, our lives defined by our routines, we never quite understand the Technicolor possibilities just beyond the box in which we live.

Every so often a vision of greatness flashes into our imaginations. Tales of El Dorado, the city of gold, have caused generations past to ask, “What if?” What if I was rich? What if I discovered my wings and broke free from this earthbound life? What if my better self was set free of its limits? David Bowie expressed this deep yearning in the lyric, “We could be heroes, just for one day.”

We all have had at some point an inner vision of our self as larger-than-life. In the early phases of life that may simply be our ego run amok. But out of the shards of the inevitable disappointment that life brings, this vision of possibility may be God whispering to us about what we could be if we would only trust him fully. Some of us get in touch with it from time to time. But most of us live life in the muddy trenches, persuaded by a flood of data that this idealized version of our self will never come to pass.

When I see people who have been beaten down by life, who have given in to the cynical thought that they’ll never do anything great, I want to breathe life into them like that firefighter blowing into the bagpipe. I want to arouse in them the will to fight. I want to assume the posture of a coach exhorting his elite athletes: “Don’t believe those damnable lies about yourself! They’re from the pit of hell and they smell like smoke.”

I’ve seen the most simple and untalented of people become great because they chose to trust God and God gave them their dreams. Don’t believe the one the Scriptures calls “the Accuser of the brethren” – he’s a master at deception; his accusations are lies pure and simple.

What are the dreams that God has given you? What are the lies that have caused you to doubt them or even give up on them? Today, if you choose, by daring to go for your dreams, you can be a hero to someone. Believe it: You were made for greatness!