5 Lessons For Millennial Men From the Greatest Generation

In Tom Brokaw’s book, The Greatest Generation, he remembers his mother telling him the story of the day Gordon Larsen came into the post office where she worked. Larsen stopped in to complain about the rowdiness of the teenagers the night before.

Brokaw’s mother was surprised at his tone and asked him good-naturedly, “Oh Gordon, what were you doing when you were seventeen?”

Gordon looked at her squarely in the eye and said, “I was landing at Guadalcanal.” He then turned and left the post office.

There’s a saying that each generation is most like their grandparent’s. What were their values?

When the Greatest Generation accepted responsibility for something, they also accepted all the consequences of that decision, whether good or bad. They were not a generation of whiners or excuse makers. They took pride in personal accountability. Stories like that of Wesley Ko inspire.

Soon after the war, Ko started a printing business. After 35 years of working hard to transform it into a successful company, he decided to relocate his business from Philadelphia to upstate New York. Ko personally guaranteed the 1.3 million dollar loan needed to make the move. The transition did not go as expected, and Ko’s company faced several setbacks; after only a year, he was forced to go out of business.

Ko said, “It was a big decision making time. I couldn’t retire. I hadn’t taken out Social Security. So at the age of seventy I had to go get a job and start paying back that million-dollar loan. I just didn’t feel comfortable with declaring bankruptcy. I just didn’t think it was the honorable thing to do, even though it would have been easier.”

If your grandparents are anything like mine, then their house is stuffed with doodads and boxes of stuff. They have a sort of pack rat mentality because they grew up in the Great Depression where the next canister of oats or pair of pants was not guaranteed. They learned to live on less and be grateful for the things they had, no matter how humble. It didn’t take a new Xbox to brighten their Christmas morning; an orange at the bottom of a stocking was enough to knock their socks off.

One of the mottos of the Greatest Generation was “use it up, wear it out, make it do, or do without.” Of course, it’s hard to “make it do” if you don’t know how to fix it, and thus handiness was also central to this generation’s frugality. 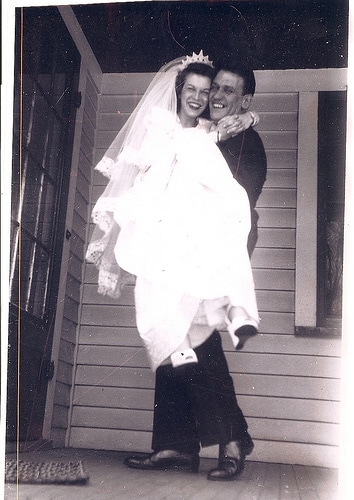 The men of the Greatest Generation took their marriage vows seriously. Brokaw wrote, “It was the last generation in which, broadly speaking, marriage was a commitment and divorce was not an option. I can’t remember one of my parents’ friends who was divorced. In the communities where we lived it was treated as a minor scandal.” The numbers bear Brokaw’s anecdotal evidence out: of all the new marriages in 1940, 1 in 6 ended in divorce. By the late 1990’s, that number was 1 in 2.

What’s their secret? The answer can really be found in changing expectations. As Brokaw observes, “When they got married and began families it was not a matter of thinking, “Well, let’s see how this works out.” Some would argue that marriages were less happy because divorce wasn’t an option. But could it be that the opposite was true? That with the divorce option off the table the whole tenor of your marriage would change? Maybe things wouldn’t be so bad if you didn’t think there was an escape hatch, and you knew that whatever bumps you hit in the road, you had to work through them together.

In war, these men had learned to focus on the objective at hand and not to give up until that objective and the mission as a whole was accomplished. When they got home, they carried that focus over to the world of work. They could find happiness in any job they did, because they weren’t just working for personal, self-fulfillment; they labored for a bigger purpose: to give their families the financial security they hadn’t enjoyed growing up.

As soon as they graduate college, many men today want the things it took our parents and grandparents 30 years to acquire. But the Greatest Generation knew that going into the debt was not the way to get the things you want. They understood that the good things in life must be earned by honest toil.

The Greatest Generation wasn’t the greatest despite the challenges they faced, but because of them. Today many men shirk challenge and difficult pursuits, believing that the easier life is, the happier they’ll be. But our grandfathers knew better. They knew that one cannot have the bitter without the sweet, and that true happiness comes from overcoming the kind of challenges that build character and refine the soul. The challenges they experienced made their joy all the more sweet because it was tinged with the gratitude of knowing how easily it could all have been taken away.